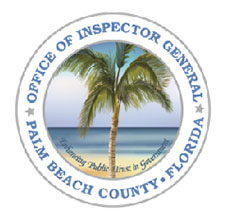 A circuit court judge ruled this week that municipalities must pay their part to support the Palm Beach County Office of the Inspector General after a long legal battle by 14 municipalities.

Palm Beach County Circuit Judge Catherine Brunson ruled that the municipalities must pay their share, supporting a 2010 referendum that said the office would be supported by a 0.25 percent charge to vendors.

The lawsuit was brought by the City of West Palm Beach with support from 13 other municipalities.

Former County Commissioner Jess Santamaria, who testified before a grand jury in 2008 on corruption in Palm Beach County, and also testified at the recent court hearing, said the ruling basically reiterated what the county ordinance creating the office said, that the municipalities must pay their share.

“The grand jury confirmed in 2009 during the investigation that Palm Beach was still ‘corruption county,’” he said. “They did a thorough investigation with 30 or 40 witnesses. I was a witness.”

The grand jury recommendation was to follow the example of Miami-Dade and have the office funded by a 0.25 percent charge to the vendor. “It’s been done already by Miami for about 13 years successfully,” said Santamaria, who made support of the inspector general a hallmark of his county tenure.

The county approved the inspector general ordinance in a 7-0 vote in 2010, which was subsequently approved by voters in all 38 municipalities in a 72 percent overall vote. The provision for payment was with a 0.25 percent vendor fee, which led to the lawsuit by municipalities that contended the county did not have authority to tax the municipalities.

Since the lawsuit, the Office of the Inspector General has been hamstrung, operating at about half of its intended budget, and the county has been lending the office money out of the general fund.

Santamaria said he was asked by legal staff to testify on behalf of the county, along with Inspector General John Carey, Assistant County Administrator Brad Merriman and Finance Officer Liz Bloeser.

“I was enthusiastic,” Santamaria said. “When I was under deposition by the lawyer of West Palm Beach, I accused them of hiding something. I asked, ‘Why don’t you want to be watched?’”

Santamaria said he felt the lawsuit was an instance of government going against the will of the public.

“Some elected officials went against the public in the lawsuit,” he said. “The sad part is that they are using taxpayers’ money. The taxpayer is paying twice.”

Santamaria said he is glad the lawsuit is over after years of legal wrangling and a seven-month trial. “I never lost confidence,” he said.

Wellington Village Manager Paul Schofield said he was not surprised by the outcome. Wellington was part of the lawsuit initially, but subsequently pulled out after the 2012 election, when Bob Margolis replaced Darell Bowen as mayor.

“We expected that the cities would have to pay, and if you remember, even when we objected to the means of the assessment, the then-council agreed to participate in the lawsuit, but they also instructed that we would make the payments,” Schofield said.

He pointed out that Palm Beach County Clerk & Comptroller Sharon Bock, who was an intervener in the lawsuit, had not accepted payments for the Office of the Inspector General from the municipalities until a judgment was rendered. “It’s going to be interesting because the clerk’s office is going to have to decide what they’re going to do now that they have the ruling,” Schofield said. “They’ve not been accepting the checks. My guess is they’ll start accepting them now, but we all knew those fees had to be paid. Wellington dropped out of that suit a long time ago, and we had never agreed to withhold payment, but I think at this point everybody is just glad it’s over.”

Royal Palm Beach never participated in the lawsuit and had offered to pay its share but was also refused payment by Bock. Village Manager Ray Liggins said it was interesting that the judge agreed with the county on all points.

“Lawyers have told me there were some precedent-setting arguments,” Liggins said, explaining that the judge placed a lot of weight on the voter referendum.

“She ruled that it was a user fee and a regulatory fee,” he said. “That wasn’t expected. What the cities expect to do now, I don’t know.”

He estimated that Royal Palm Beach would pay between $20,000 and $40,000, which he did not consider a significant amount for the service that is provided.