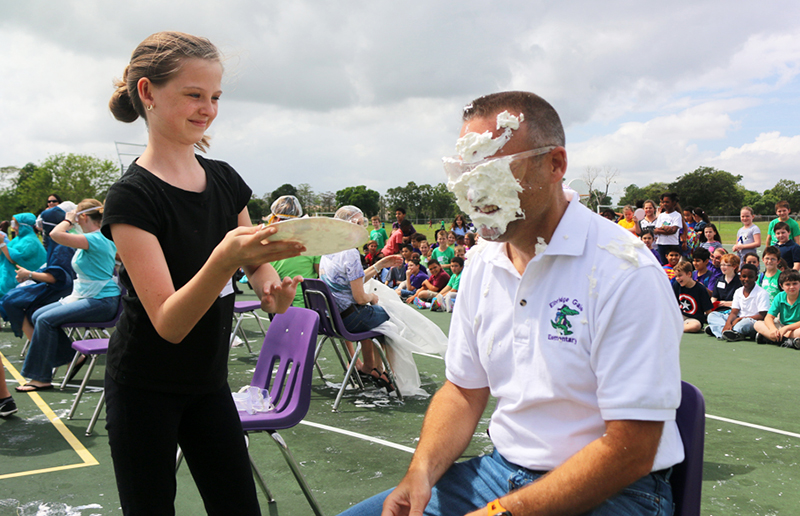 Students at Elbridge Gale Elementary School in Wellington were provided the opportunity to cream their teachers for a good cause on Friday, March 13.

The students used plates filled with whipped cream donated by Chick-Fil-A to get their teachers messy the day before “Pi Day” as a fundraiser for the Leukemia & Lymphoma Society, in conjunction with the Pasta for Pennies program, presented by Olive Garden.

Elbridge Gale became involved with the Leukemia & Lymphoma Society because of a former student. “We had a fifth-grade student here who had leukemia, and unfortunately he has passed away,” guidance counselor Nicole Martinez recalled.

That student, Sebastian Sarmiento, was diagnosed with leukemia in 2007 and died in 2009.

“We started our passion for the cause,” Martinez said. “This year, we have a student in kindergarten who is currently undergoing treatment. The fundraiser is pretty near and dear to us.”

“It blows my mind, these kids and the efforts that they go through to fundraise,” Martinez said. “It’s phenomenal.”

One student recently went to her homeowners’ association to obtain approval for a lemonade stand to raise money for the Leukemia & Lymphoma Society, Martinez added.

The most recent fundraiser was probably one of the messiest, with plastic bag clothing, goggles and plates full of whipped cream — but it brought giggles, laughter and cheer.

“It was so awesome. It was so incredible,” Principal Gail Pasterczyk said.

Pasterczyk admitted being hesitant at first when Martinez presented the idea.

“I was nervous about the teachers’ reactions,” she said. “They got so behind this. I can’t believe it brought in $3,000. Totally amazing!”

Volunteers were on hand filling the plates with whipped cream and offering baby wipes for cleanup.

Martinez saw the list of fundraisers that the Leukemia & Lymphoma Society does, and her eye was drawn to “Pi Day.” Almost every teacher participated — close to 60 — and 300 pies were bought for $10 each. It was such a success that Martinez was quick to begin planning a follow-up event next year.

Stacy Hewitt, campaign manager for school and youth programs at the local chapter of the Leukemia & Lymphoma Society, was on hand for the event.

“The school has been participating for several years because they have been touched more than once by a student with leukemia,” she said. “This really has a big impact on how we’re able to fund research, because that’s really where these donations go to — creating cures and treatments. Our goal is for students who have leukemia to go from cancer to college.”

Pasta for Pennies is another Leukemia & Lymphoma Society fundraiser, and the top classroom of students bringing in change is awarded a thank-you party from Olive Garden. Often, cancer survivors come in to join them for lunch.

“It’s a really great way for the kids to have a visual,” Hewitt said, “to see what kind of compassion and caring that they’re doing, and get the thank you from the survivors, because they know the kids are doing it for them.”