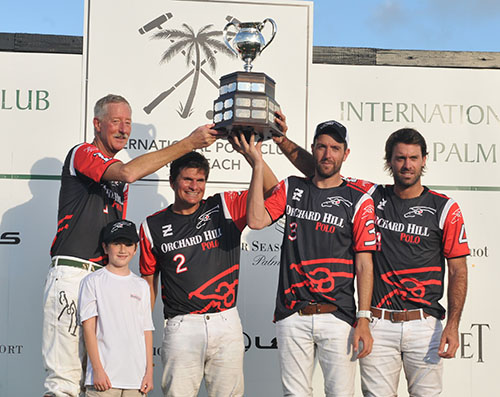 With Facundo Pieres and his cousin Polito Pieres on the Orchard Hill roster, polo fans were expecting a high-scoring affair, but it was Alegria team captain Mannix who lit up the scoreboard in the opening chukker. Mannix scored the first goal of the game on a 30-yard penalty shot in the opening seconds of play. Facundo Pieres took advantage of an Alegria foul a minute into the period by converting a 60-yard penalty shot to make it 1-1. Mannix then added two goals from the field in 60 seconds to make it 3-1. Ferrario cut the lead to a single goal, 3-2, with his first score of the game a minute later, and Facundo Pieres tied it up at 3-3 at the 3:06 mark. Mannix then drilled the ball through the Orchard Hill goalposts from 65 yards out and then stole the ball from Facundo Pieres on a knock-in and scored again to make it 5-3. Facundo Pieres converted a 30-yard penalty shot with three seconds left in the chukker to trail Alegria, 5-4.

The fast pace continued into the second chukker with Facundo Pieres tying it at 5-5 with the opening goal. Giannico’s first goal of the game gave the lead back to Alegria, 6-5. Polito Pieres countered with consecutive goals to go ahead, 7-6, and Facundo Pieres scored the final goal of the chukker, which ended 8-6.

Orchard Hill continued to roll in the third. Aided by a defense that held Alegria scoreless, Ferrario scored the first goal of the chukker from the field, followed by a 60-yard penalty goal from Facundo Pieres. At the end of the first half, Orchard Hill was in control of a 10-6 game.

When play resumed, Aguerre scored a goal on the nearside to make it 10-7, and Facundo Pieres answered back with a goal of his own, taking the score to 11-7. Ulloa finally got on the scoreboard with a 30-yard penalty shot, and followed it up with a goal from the field, making it 11-9 with 1:15 left in the period. With time running out, Facundo Pieres knocked the ball in and carried it 300 yards down the field to score as time expired with the scoreboard reading 12-9.

Ulloa had Alegria within two goals of the lead, 14-12, with the opening score of the sixth chukker, but Orchard Hill answered right back. Goals from Facundo and Polito Pieres had Orchard solidly in the lead, 16-12 with less than two minutes to go in the match. Ulloa managed a single goal for Alegria, but it was Orchard Hill with the 16-13 victory.

Facundo Pieres led all scoring with ten goals (three on penalty conversions). Polito Pieres scored four times, and Ferrario added a pair of goals for the win. Mannix was the high scorer for Alegria with six goals. Ulloa was credited with five goals, and Aguerre and Giannico added single goals in the loss.