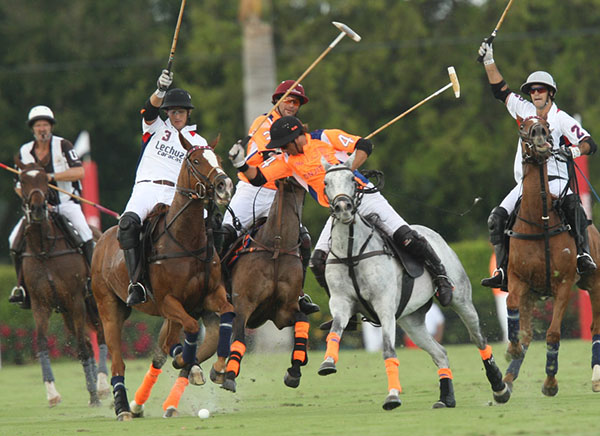 In Sunday’s opening Piaget Gold Cup quarterfinal, Valiente took the early 3-2 lead on two goals from Guillermo Terrera and a 30-yard penalty conversion from Alejo Taranco. Alegria missed on a couple of shots on goal but picked up single scores from Hilario Ulloa and Mariano Aguerre.

Ulloa scored from the field two minutes into the second period for a 3-3 tie. Adolfo Cambiaso countered with a goal of his own at the 4:07 mark, for the final goal in a defensively oriented chukker.

Alegria team captain Julian Mannix took advantage of a Valiente foul and converted a 30-yard penalty shot that tied the game at 4-4. Terrera added a goal from the field that kept Valiente in the lead, 5-4. With just over two minutes on the clock, Aguerre scored his second goal of the day and tied the score at 5-5 to end the first half.

Alegria took control of the game in the fourth period with Ulloa scoring the first goal of the chukker, making it 6-5. Valiente pressed their attack, but the Alegria defense held. Mannix scored again midway through the chukker, and Ulloa closed out the chukker with a goal from the field, making the score 8-5.

There was no letup from the Alegria team with Mannix converting a 40-yard penalty shot for a goal, making it 9-5. Cambiaso then scored on a 60-yard penalty shot to make it 9-6, and Taranco and Mannix exchanged penalty goals. Terrera scored the final goal of the period from the field as Valiente trailed Alegria, 10-8.

Aguerre scored two minutes into the sixth chukker, making it 11-8, and Ulloa added a goal less than a minute later for a 12-8 lead. Shots on goal were off the mark for Valiente, with Mannix and Ulloa scoring the final two goals of the game in a 14-8 rout.

Ulloa led the Alegria attack with six goals. Mannix was credited with five goals (three on penalty conversions) and Aguerre scored three times for the win. Terrera’s four goals were tops for Valiente. Taranco and Cambiaso each scored twice in the loss.

In a tentative first chukker, Lechuza 10-goaler Nero scored the first goal of the game after more than four minutes of play. Sola responded with a goal at the 1:32 mark in a 1-1 chukker.

Sola added a goal in the second chukker on a 30-yard penalty shot for the 2-1 advantage. Nero tied it up again with a goal from the field. Astrada scored the final goal of the second period with less than a minute on the clock, leading his team off the field with a narrow 3-2 lead.

Stop and go action led to two more goals in the third. Astrada opened the chukker with a goal from the field in the opening seconds of action. Pieres scored his first goal of the game in grand style as he took the ball on the knock-in and raced the length of the field to score what would prove to be the final goal of the chukker, giving the 4-3 halftime lead to Las Monjitas.

Astrada scored on a 90-yard shot on goal in the fourth period that extended the Las Monjitas lead to two goals, 5-3. Pieres fired back with a goal with 3:47 left to play in the chukker, making it 5-4. A final goal from Vargas with six seconds on the clock had the score all even at 5-5.

A determined Las Monjitas team returned to the field in the fifth period. Goals from Sola and Merlos were buoyed with a Penalty 1 that awarded Las Monjitas a goal. Nero and Pieres and the impressive Lechuza lineup could do little to stop the run of Sola and company, falling behind by three goals, 8-5.

Astrada scored the first goal of the sixth chukker on a brilliantly executed shot for a goal on an extreme angle, making it 9-5. Grossi responded with a goal for Lechuza, but time was running out on them. While disciplined defensive efforts shut down the Lechuza attack for the balance of the chukker, Sola converted a 60-yard penalty shot for a goal and added another from the field in the final 12 seconds of play for the 11-6 victory.