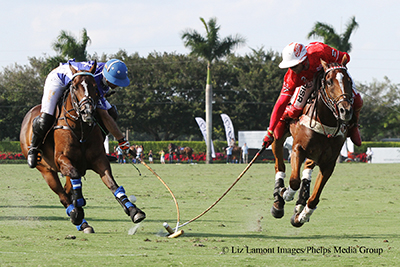 If there is one axiom that has emerged from this year’s 26-goal season at IPC, it is this: Never underestimate Coca-Cola.

Just when it looked like Coca-Cola was about to lose to Valiente, Erskine smacked in a goal, tying the game in the last second of regulation play. Then, to top it off, along came the day’s high-scorer, Arellano, whose seventh goal sealed the deal in overtime.

“It was amazing the way we tied it up in the last chukker with .001 left,” a stunned Stirling said. “We took a chance, and we had it. Then we took a chance in OT, and again! It was a very good win for us.”

Despite its undefeated record in the 111th U.S. Open, Coca-Cola seemed to have taken even itself by a bit of surprise last Sunday.

“We knew it was going to be extremely tough because they have an all-pro team,” Arellano said. “We were able to keep them close the whole time, and then it’s anybody’s game.”

Indeed, the celebration could just as easily have ended up in Valiente’s tent, as it has so many times before. But Arellano’s troupe refused to stop tap dancing until the last note of music lilted away into the ether. In polo’s version of the “hail Mary pass,” Arellano, in a leap of faith, hurtled the ball downfield to a waiting Johnston. “I knew I had to get the ball there fast because I would have only one chance,” Arellano said.

Ditto for Johnston, who took the pass and went to town with one of her trademark slapstick dashes toward goal. Things were looking golden for Coca-Cola, but just yards from the goalmouth, the ball pulled loose, triggering a free-for-all and drawing a screeching whistle. Having already used its second-half challenge, Valiente could not contest the foul.

Arellano and Stirling painstakingly teed up the ball as they stared down, methodically circling it like a hawk hovering over prey. Then they looked up and locked eyes. Stirling moved away, leaving Arellano to finish the job.

Although Coca-Cola got the win, it didn’t get there the way it had envisioned. In a departure from its game plan in previous matches, the day’s strategy was for her teammates to feed the ball to Johnston.

“We spoke about doing something different, but we didn’t do anything like what we spoke about,” Erskine said. “We were going to push Gillian all day, and for some reason we never got her the ball. Finally, she got the chance to put in the winning goal.”

To her credit, Johnston sunk an astounding goal in the pivotal sixth chukker, which saw a lot of play through midfield. Erskine had battled the ball out of a scuffle and handed it over to Stirling, who, with the precision of a Swiss timepiece, sent it sailing downfield with a power hit to Johnston. With just under three minutes on the clock, she tied the game 10-10.

Matching its strong performance in the fifth chukker, Valiente kept rocking in the sixth, again answering every Coca-Cola goal. Taranco pulled Valiente into a slim lead, and from there the score followed a breathtaking back-and-forth trajectory all the way to the final horn.

After winning the knock-in, Caset initiated a long trek toward goal. He and Terrera kept swapping the ball, playing an extended game of cat and mouse with Erskine, who was all over them.

As they soon discovered, that was a dangerous game to play with an opponent as stealthy as Erskine. He drew gasps from the Valiente contingent on the sidelines more than once when he stole the ball, only to have the Caset-Terrera force swipe it right back.

At one point, Valiente played an effective mind game with Coca-Cola, as 10-goaler Caset took out the defender to allow 2-goaler Beresford to run with the play. Eighteen-year-old Beresford, who had subbed in and was playing the first full 26-goal game of his life, did his job handily. He escorted the ball toward goal, handing it over to Taranco at the perfect moment. Backed up nicely by his teammates, Taranco put it in.

All in all, the game was a commendable effort by Valiente, which showed its mettle against all odds. Last week, when half of the team (Adolfo Cambiaso and Bob Jornayvaz) had to be subbed out due to injuries, Caset commented, “It’s like a totally new team” — never an easy form to morph into, particularly smack in the midst of the most prestigious tournament of the season.

ABOVE: Sapo Caset and Sugar Erskine battle for control of the ball.