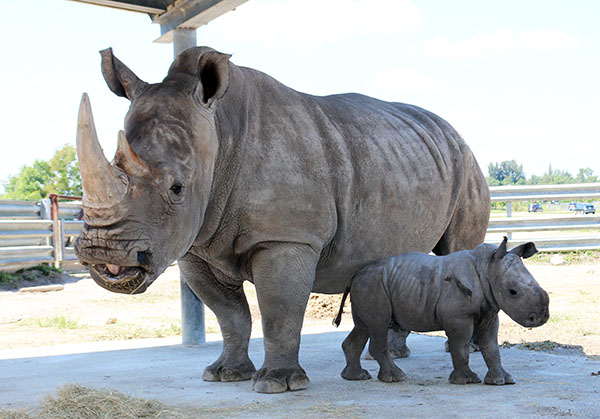 It’s baby time at Lion Country Safari, and at 11:30 a.m. on March 18, safari staff welcomed into the world a grayish bundle of joy named Blossom. She is rapidly gaining weight, getting steadier on her feet and happily exploring her new surroundings.

Blossom is a southern white rhinoceros, one of about 18,000 white rhinos on the planet and one of 13 living at Lion Country Safari.

White rhinos aren’t actually white, Wolf noted, they’re more of a grayish brown. Their name is thought to originate from the Afrikaans word “weit,” which refers to their wide mouths. White rhinos are the only one of the five species of rhinos to eat an all-grass diet. The others are browsers.

“English-speaking people picked that up as the color white,” Wolf said. “The black rhino that also lives in Africa has a very pointy lip and eats off trees.”

While Blossom and Bloom remain in the rhino maternity area — they’re visible to visitors driving through the safari — Alice watches over Bloom’s other two calves.

Wolf, who has been at Lion Country Safari for more than 40 years, said that Bloom is around 17 years old, which, he said, is around the average age for mothering.

Blossom is unusual because she was born during the day instead of at night, after Bloom carried her for 16 months. Now, at two weeks old, Blossom is estimated to weigh between 100 and 140 pounds.

Baby rhinos gain between 3 and 4 pounds a day, gaining approximately a thousand pounds a year for their first three years.

Wolf estimates Bloom to weigh approximately 3,500 to 3,800 lbs. White rhinos are the biggest of all the rhinos and can weigh up to 5,000 lbs.

“The calves generally stay with the cow for two to almost nine years,” he explained. “They hang out in groups… there are girls everywhere!”

This is in no way a complaint by Wolf, who merely whistles or taps his fingers on a surface, and Bloom happily plods over. Just like dogs, rhinos like head scratches, too. Warning: Do not try that yourself. Wolf and Bloom have a relationship fostered over decades. Rhinos are most certainly wild animals.

Blossom’s weight isn’t yet official because they haven’t put her on a scale. Bloom is still keeping a very close eye on her baby. When Bloom is ready to let them weigh Blossom, an official number will be recorded.

“As long as everything’s wonderful, we don’t mess,” Wolf said. “The baby is nursing, the baby is healthy.”

One of Blossom’s favorite places is a dugout that Bloom made for her. Rhinos dig in the dirt for the cooler layers to help stay cool.

They have sensitive skin, Wolf explained, and mud is their form of sunscreen. They also have thick protective folds that protect them from spiky plants out in the wild. While the thick skin protects them from plants, it doesn’t help against poachers.

The other four species of rhinos are black, Indian, Sumatran and Javan. Their horns, which are so coveted that they are killed for, are made of the same substance as fingernails — keratin. When cut, it will grow back. Nevertheless, poachers kill them for their horns. Additionally, Wolf explained, poachers hunt down the breeding-age females and males, the largest of the rhinos, for their horns, effectively halting the continuation of the species.

Lion Country Safari, like many conservation groups, is working hard to help white rhinos and other endangered or threatened animals survive.

“We’ve had more than 30 southern white rhinos born at Lion Country Safari since 1979,” said Jennifer Berthiaume, director of public relations and marketing. “As Terry mentioned, with 1,000 being killed in the wild every single year… it’s very important for the conservation of the species, and we’re very proud of the breeding success we’ve had here with these rhinos.”

Rhinos have poor eyesight but a great sense of smell, Wolf said, and they use the restroom in the same spot, to mark their territory. “It’s a very popular crossword puzzle word; it’s called a midden,” he said.

Bloom eats approximately 70 to 80 pounds of hay and 30 pounds of grain a day.

“They love their scratch therapy, and it’s so interesting that at her age she’s scratching,” Berthiaume said, watching Blossom rub against a pole and then Bloom’s leg.

After about six months, Blossom will start eating solid foods and stop nursing.

Berthiaume said that many people are coming to see the baby rhino, as well as the baby giraffes. “Spring is baby season on safari,” she said.

To learn more about rhinos, visit the International Rhino Foundation at www.rhinos.org or Save the Rhinos at www.savetherhino.org.

To follow Blossom as she grows up, visit Lion Country Safari and keep an eye on its social media pages. Learn more by visiting www.lioncountrysafari.com.

ABOVE: White rhino Bloom with her two-week-old baby, Blossom.