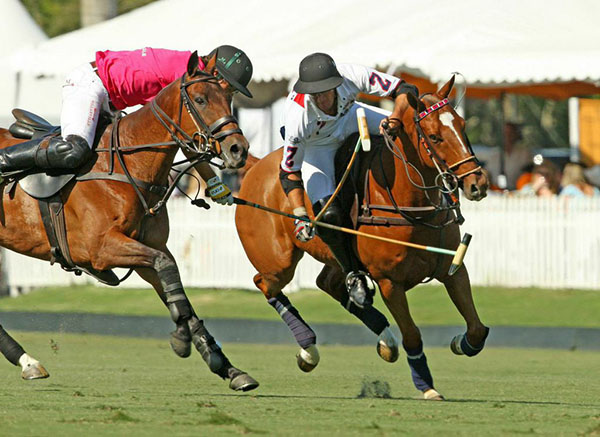 The U.S. Open Polo Championship continued in full force last Sunday, with an exciting triple play at the International Polo Club Palm Beach. In all three games, a single point dictated the outcome.

Polo is a game played as much in the head as it is on the field. Lechuza Caracas put that principle into action Sunday when it stared down the mighty Alegria team, defending champion of the U.S. Open. Taking a gamble, Lechuza Caracas won by hedging its bets on a strategic move: scrambling the lineup.

That move has worked at times for other teams, but it is risky business. Just ask Agustin Garcia Grossi. “We’re lucky we scored the last goal,” he said moments after he made the hit that broke the 12-12 tie in overtime.

Playing a mind game as much as an athletic one, the Lechuza Caracas squadron took out its opponent by turning polo into a shell game. The question of the day was: Is that Nico Pieres or Agustin Garcia Grossi under those Foster Grants?

In an eleventh-hour switcheroo that had even the announcers guessing for a bit, Lechuza Caracas swapped the positions of two of its key players. The decision was made so shortly before the start of the game that the program and the scoreboard still showed them in their old positions. But Pieres, who usually plays number two, was wearing the number three jersey, and Grossi, the team’s steadfast number three, was sporting a two on his back.

The reason became evident soon enough. Pieres was all over the ball, the field and the scoreboard from start to finish. The high-scorer of the game with nine goals, he was omnipresent throughout the match. Almost without exception, his success was facilitated by Grossi, who made it his perpetual mission to mow a path for Pieres to carry the ball through.

Why did this strategy work better than the original formula, when Pieres was playing number two and Garcia number three?

“The change of positions helped us a lot because we can send Flaco (Grossi) forward. He’s more powerful than me,” Pieres said. “Then I could work with the ball more, and I’m a bit better at that.”

The impetus for the change, said the two, was the team’s disappointment over its record this season in 26-goal play.

“We changed the lineup because we didn’t do so well in the last tournament,” said Grossi, referring to the USPA Piaget Gold Cup.

Lechuza Caracas had one win and three losses in that tournament and was knocked out of contention in the quarterfinals.

There were no signs of the past in last Sunday’s game. Lechuza Caracas came onto the field with the eye of the tiger. At every possible opportunity, one or another of its players pounced upon the ball as though it were live prey. Alegria showed a similar resolve, but it seemed to be tinged with a touch of uncertainty about how to thwart the newly restructured Lechuza Caracas team.

With consummate speed and power — and with Grossi running interference — Pieres cut to the center and outran a herd of defenders to tie the game at 1-1. That set the tone for the rest of the game. Pieres and Grossi melded into a tag team, keeping Alegria scoreless in the second chukker and bringing Lechuza Caracas into the lead for the first time in the third chukker. Picking up a long pass downfield from Pieres, Grossi made a supremely confident cutshot that rolled the ball in within inches of the goalpost, moving Lechuza Caracas into a 5-4 lead.

Alegria retook the lead courtesy of Ulloa, who scored on a penalty shot. Moments before, Aguerre had sent a centering shot to Ulloa, which drew a whistle, and a foul was called in favor of Alegria. Alegria challenged the call on ball placement. Had it been successful, the challenge would have changed the penalty two to a penalty one (an automatic goal for Alegria). The call stood, and Ulloa scored on the penalty two, giving Alegria a 6-5 lead at the end of the first half.

The pace picked up decidedly in the second half. Taking the ball on the nearside, Giannini worked the room with finesse, zig-zagging to get past the defenders and deliver the ball to Ulloa. With a burst of speed, Ulloa ran it into goal, giving Alegria a two-point lead. Nero, the only 10-goaler on the field, outran Mannix and sent a slick pass to Pieres, who rode his speed stick toward the goal and swatted in a pinpoint shot. Pieres followed up his own act in the fifth chukker, making three goals (two of them from the field).

The score swapped back and forth between a tie and a one-point lead for most of the sixth chukker. At a pivotal juncture, a Pieres play drew a whistle smack in front of Alegria’s goal, resulting in a penalty one for Alegria. Lechuza Caracas unsuccessfully challenged the automatic goal.

With just 47 seconds left in regulation play, a penalty three was moved to a penalty two in favor of Alegria. Ulloa took the shot and tied the game at 12-12, sending it into overtime. The seventh chukker went on for an excruciating two-and-a-half minutes until Grossi sealed the deal for Lechuza Caracas.

Nero said he felt there was more to his team’s win than its lineup change. Although he agreed that the Pieres-Grossi swap-out had been helpful, he also pointed to Lechuza Caracas’ intense preparation during the previous week. Even more crucial, he said, was Sunday’s outstanding performance by the team’s captain, Victor Vargas, who played his normal number one position.

Grossi was named Most Valuable Player. Ulloa’s mount in the second and sixth chukkers, Clave, was named Best Playing Pony.

ABOVE: Hilario Ulloa and Nico Pieres battle for control of the ball. Photo by Alex Pacheco