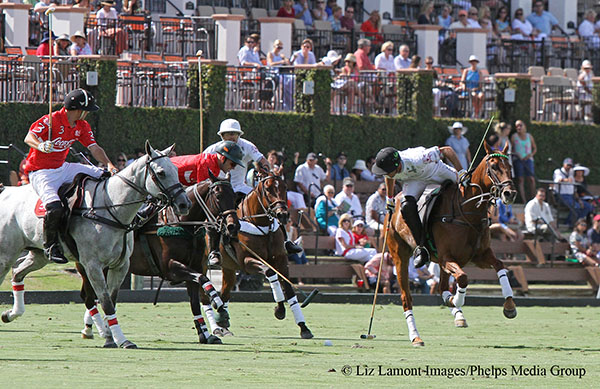 The 2015 season at the International Polo Club Palm Beach will come to an exciting finish this Sunday afternoon in the final match of the 111th U.S. Open Polo Championship.

In the opening minutes of the game, FlexJet took a brief lead with two field goals, but Coca-Cola promptly touched down like a tornado. Before the first chukker ended, Arellano made three points on penalty shots, and teammates Erskine and Johnston each scored from the field. Erskine’s goal started with his save in the danger zone, continued with a pass from Arellano and finished with a trademark Erskine breakaway run to goal. Johnston, on a pickup, scored from 83 yards out.

After its jump-start, Coca-Cola stayed in the groove, playing a solid 42 minutes of power polo and never letting FlexJet regain the lead. Stirling outmaneuvered his defenders in the second chukker, breaking free from a five-horse scramble to run the ball into goal. By the middle of the chukker, all four Coca-Cola players had scored at least once in the game. The team led 8-4 at the end of the first half.

Coca-Cola scored at the top of the fourth on a three-way play. Arellano took the knock-in and sent the ball to Erskine, who made a long pass to Johnston. She was out ahead, waiting in the wings. Alternating from one side of her pony to the other, she worked the ball toward goal. When her angle of approach looked like a shot on goal could go wide, she put the right touch of backspin on the ball and sent it straight between the goalposts.

On a pass from Stirling, Erskine closed the fourth chukker with one of his four field goals in the game. Erskine kept the wraps on a ball that was bouncing knee-high and shepherded it into goal.

Still, FlexJet could not be written off. “They are very technically sound, so we had to make sure we didn’t make mistakes,” Erskine said. “Every time we made a mistake, they scored a goal. That’s their system. They’re very well organized.”

With two eight-goalers and a nine in its lineup, FlexJet was packing a lot of firepower and pulled the trigger whenever a door opened. It almost crossed the threshold in the fifth chukker when Roldan pulled off a turbo-charged hat trick. In just three-and-a-half minutes, he galloped up and down the field to make three consecutive goals, on top of his previous three.

FlexJet’s power surge put a huge dent in the five-point lead Coca-Cola had going into the fifth chukker, tightening the point spread from 11-6 to 11-9. For a time it appeared that FlexJet may be about to catch up or maybe even turn the tide.

But Coca-Cola was not about to let that happen. It promptly nipped Roldan’s scoring rampage, with Erskine and Arellano each answering one of his goals.

Arellano slammed in two more goals in the sixth chukker, and Laprida had the final word before the game ended 15-10 for Coca-Cola.

“We came out really up for the game, really focused,” said Stirling, the sole 10-goaler on the field. “The four of us know exactly what our weapon is, and that’s our number one. So we use her, she helps us, we use Sugar and Julio to open the game up and play our way. It’s all team effort. If we win, we win as a team, and when we lose, we lose as a team.”

Arellano said that the game plan was to try to open the game up. “I got the ball to Gillian, and she did what she had to do with it,” he said. “That puts a lot of pressure on most teams. When the sponsor can get a few goals in like that early, it makes it very difficult. She has been working very hard, and Pelon has been controlling the ball when he needs to, which has been phenomenal, and Sugar and I just try to do our part.”

Earlier in the day, Valiente defeated Lechuza Caracas 13-12 to claim another semifinal slot. The semifinals were held Wednesday with Orchard Hill defeating Coca-Cola 12-8 and Valiente outlasting Audi 11-10 in ovetime.

The semifinals set up what is sure to be an exciting final match between Bob Jornayvaz’ Valiente, featuring 10-goaler Adolfo Cambiaso, and Steve Van Andel’s Orchard Hill, featuring superstars Facundo and Polito Pieres.