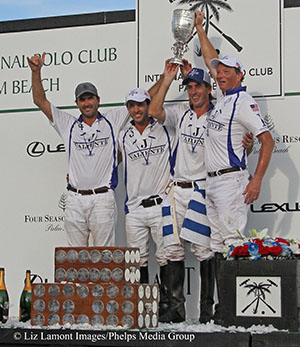 When it came to the final of the 111th U.S. Open Championships, the third time was a charm for Valiente. After an extraordinarily challenging season, the team won the golden key it had lost twice before.

To no one’s surprise, Cambiaso was the linchpin. Facundo Pieres had just scored from the penalty line, giving Orchard Hill a two-point lead in what looked to be the last gasp of the game. But then Orchard Hill lost a challenge to a penalty one awarded to Valiente, and Terrera scored, tying the game 9-9.

With a hint of an overtime chukker hovering on the horizon, Taranco scored from the penalty line, starting a seismic shift that became insurmountable.

With just a minute left in regulation play, Valiente had a choice to make: Let the clock run down and bank on taking a one-point win, or just go for it. Cambiaso removed the question mark with a sudden do-or-die move that took the field by surprise. He snatched the ball from the pack and made a flat-out gallop for goal. With one huge swing of the mallet, it was game over.

Valiente played a clean game, making 12 fouls to Orchard Hill’s 18. Polito and Facundo Pieres made a string of amazing plays throughout the match. Polito Pieres brought Orchard Hill to a two-point lead at the end of the first chukker. The rest of the first half played more like an extended practice round than a final. Orchard Hill held a slim lead, with Valiente intermittently tying the score. The first half ended with Orchard Hill ahead 5-4.

The real game began in the fourth chukker. Cambiaso came firing right out of the gate for a hat trick, slamming in three successive field goals and moving Valiente into the lead for the first time. A stunned Orchard Hill was scoreless in the chukker, which ended 7-5 for Valiente.

The fifth chukker saw a temporary reversal of fortune, with Valiente scoreless and Orchard Hill making three goals courtesy of the Pieres cousins (two by Polito and one by Facundo). One of Facundo Pieres’ goals came when Cambiaso was off the field changing horses. Pieres took advantage of the four-against-three scenario, making a sweeping run all the way to goal.

With astounding agility, Polito Pieres reached way back to take a pass from his cousin and then surged forward. With two players on his hip, he ran the ball straight into goal. Orchard Hill regained a tight lead, 8-7.

A reaching foul gave Orchard Hill a spot hit, which Facundo Pieres turned into the long shot of the day. From 135 yards out, he took the free hit and barreled down the field to score, giving Orchard Hill a two-point lead. Things were looking up for the team until Cambiaso and company stopped Orchard Hill in its tracks and claimed the game.

“You know, it’s just a huge honor,” said patron Bob Jornayvaz after the win. “I hate to call it getting a monkey off our back, but we’ve been working at it a long time. We were the underdogs today, and having the organizational bench strength and the horses really made a difference. I wish people could see the grooms and the vets and the farriers and what everyone does as an organization to make it happen, because they truly brought us here today.”

It was a rough, injury-filled season for Valiente. “We didn’t look very good in the C.V. Whitney Cup or the Gold Cup, and we just persevered,” Jornayvaz said. “We kept at it and we knew we had the horses to get us to the end if we could get ourselves to the end. And that’s where I’ve got to give Adolfo credit — going to the gym, working through his injuries, keeping our spirits up and making us all believe that it was possible.”

Knowing they would be facing an uphill battle in the final, the Valiente players dug in deep the day before, devoting several hours to watching footage of their previous encounters this season with Orchard Hill.

Terrera said he was “thankful and grateful for the team.”

“We were not winning, and things were not happening the way we wanted,” he said. “Everyone was pushing forward, and that’s what’s called team spirit. We didn’t change anything. We did the same the whole season. The only thing is that in the beginning, luck was not on our side. That’s not very good for your brain, your mind. And then when things begin to happen the way you want, everything goes forward.”

Cambiaso complimented IPC, which drew eight 26-goal teams and a dozen 20-goal teams in this year’s 16-week high-goal season. “I think they’re doing a great job,” he said. “It’s always great to play at a club of this level.”

The U.S. Open Final was an exciting end to a magnificent season of polo at IPC. John Wash, president of club operations, shared his thoughts about the 2015 season.

“At the beginning of the season, we predicted this would be the finest season of polo ever,” Wash said. “We hosted new teams, had record-breaking spectator numbers and expanded, exciting coverage from the media. It has been an incredible season. We want to thank all the sponsors, patrons, teams and members for a great, if not the best, season of polo ever.”

In other season-ending awards, Aspen Valley defeated FlexJet 11-8 in the Hall of Fame Cup, the U.S. Open subsidiary. Ronnie Hayes was honored with the USPA 2015 Umpire of the Year Award. Julian Mannix earned the Patron Sentient Jet Challenge with a huge 41 goals earned during the season. The Argentine Best Playing Pony was awarded to Boeing, a polo stallion owned by Jornayvaz and played by Cambiaso. Cambiaso’s mare Romana earned the coveted Willis Hartman Trophy for the Best Playing Pony of the U.S. Open Championship.