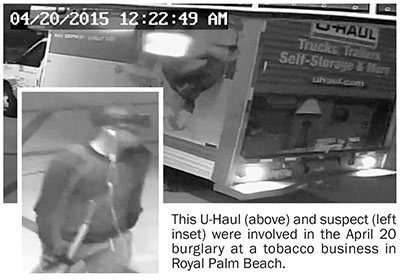 The Palm Beach County Sheriff’s Office is seeking the public’s help in finding suspects wanted in connection with the burglary of a tobacco business in Royal Palm Beach during the early morning hours of Monday, April 20.

Surveillance video captured one suspect who appears to be a light-skinned male, dressed in dark clothing, carrying red bolt cutters. Detectives believe this suspect did not act alone.

The suspects used a U-Haul truck to conceal the stolen tobacco products. A second suspect vehicle, a white Ford pickup truck with a ladder in the back, was also seen at the scene.

Anyone who has information about this burglary is urged to contact Crime Stoppers at (800) 458-TIPS.