Spring football has started, and the Seminole Ridge High School football squad is preparing to do battle in arguably the toughest district in Palm Beach County. Teams are permitted 20 days of spring training before the end of the school year, including a spring jamboree game.

“There’s no doubt, it is the toughest district in the county,” Hawks coach Scott Barnwell said. “It’s not going to be an easy battle, but it will be a battle.”

The Hawks have a tough challenge ahead, but it is a challenge that Barnwell said that his team is up for. “We feel like we’re on the road back to where we need to be,” he said. “We were a little young last year, graduating four starters.”

The Hawks are typically no stranger to postseason play, but last season, the squad finished 5-5 and missed the playoffs, with a pivotal loss to district foe Wellington. Seminole Ridge will rely on rising senior quarterback Dalton Trimble to lead the offense.

“We believe he’ll be the player we always thought he would be,” Barnwell said.

Trimble suffered a season-ending knee injury in game two last season, but the 6-foot-4-inch, 200-pound quarterback appears healthy and is throwing with accuracy. Meanwhile, Barnwell’s receiving corps are catching the ball much better and excel at catching the hard ball.

The Hawks also return most of the offensive and defensive lines. Rising senior Jake Jones will return for the Hawks as center, and provide the snaps for Trimble. At 6 feet and 275 pounds, he will anchor the offensive line. “He’s the best center in the state; he’s that good,” Barnwell said.

The Hawks are no stranger to the weight room. Football players in the Seminole Ridge program must spend time in the weight room to build their strength at least four days a week as part of their training. Barnwell explained that because of this, his team is the strongest in Palm Beach County.

Rising senior Sean Edwards will most likely get the nod at the running back position, but Justin Walsh and Jeremiah Brown will battle for playing time as well. “They’re young, so we’re going to expect them to do a lot for us this year,” Barnwell said.

Standout kicker Jacob Curran graduates, so the Hawks will rely on Jared Tolbert for their kicking game. “He’s going to be a stud, and we’re excited about him,” Barnwell added.

The Hawks will use their spring game against South Fork High School to determine who will be looked at as possible starters in the fall, and with one of the toughest schedules ahead, the Hawks appear ready to take District 9-8A head-on.

The Hawks will travel up to Stuart to play the Bulldogs on Friday, May 22 at 7 p.m.

ABOVE: A Seminole Ridge lineman practices in a blocking drill. 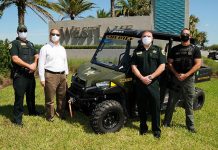