The Palm Beach County Commission on Tuesday approved an exchange of less than an acre of land in the Pond Cypress Natural Area to adjust the State Road 7 right of way in exchange for nearly 4 acres of equal or higher-quality land within the existing right of way that is immediately adjacent to the natural area.

Rob Robbins, director of the county’s Department of Environmental Resources Management (ERM), said the exchange will return land to the natural area that will not be needed for the final design of the road. He explained that it was a simple land swap between departments.

“The request is to take about eight-tenths of an acre of land managed by ERM and dedicate that as road right of way managed by Palm Beach County Engineering. In exchange, another 4 acres of land currently managed by engineering will be directed toward ERM to become part of the natural area,” Robbins said.

The land, a narrow strip along the west and north sides of the right of way, came to the county about 10 years ago as future right of way for SR 7, and most of it is in the natural area, he said.

“Here we are 10 years later, as the road is being designed, and we see that the alignment that we set aside needs to be tweaked,” Robbins said. “In this case, tweaked in favor of the natural areas, actually conveying a little more land to the natural area than there was before.”

Palm Beach County Engineer George Webb said the Florida Department of Transportation has finalized the design and knows what the needed roundabout and curve will look like.

“They’ve come to us and said, ‘We only need to use this much land,’ so this land is available to go to the natural area as sort of mitigation for the road,” Webb said. “We thought that’s wonderful, instead of having a wider road, we are actually trying to squeeze and balance out in these environmentally sensitive areas what we actually need.”

Webb said he strongly disagreed with comments made earlier by Acreage resident Alex Larson that there was a safety issue with the design.

Commissioner Paulette Burdick said she was going to support the resolution because it has a positive benefit for the natural area, but she questioned the safety of the turn, using as an example the southbound exit on Interstate 95 to Belvedere Road.

“You’re going 65 miles per hour, and FDOT designed this exit to meet their safety standards,” Burdick said. “You’re coming south on I-95 at 65, down to 15, and if you really don’t get it down to 15 miles an hour, you’re going to fly off the road at the turn, and many of the stanchions put there have been knocked down.”

Burdick said the planned SR 7 turn to the north toward Northlake Blvd. also looked severe, and pointed out that many of the drivers on the future extension would probably be going faster than they should be. “I foresee a lot of accidents at that area going over the M Canal,” she said. “The design is not acceptable to me for people’s habits in driving.”

Commissioner Priscilla Taylor made a motion to approve the resolution, which carried unanimously. 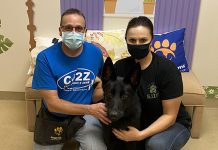