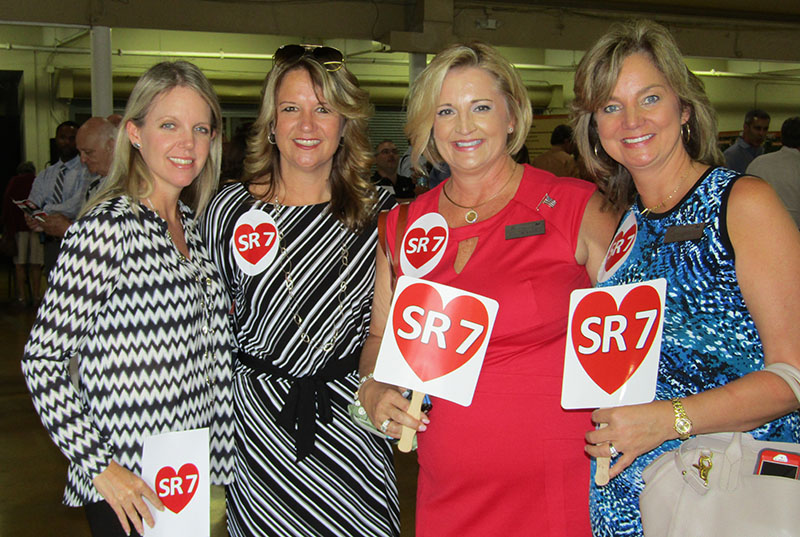 Several hundred people interested in the construction of the State Road 7 extension from 60th Street North to Northlake Blvd. turned out for a public meeting Wednesday at the South Florida Fairgrounds organized by the Florida Department of Transportation.

There were no presentations or public comment by microphone, but FDOT had posters on display showing recent changes in response to previous public comment, and numerous FDOT officials were on hand to answer questions.

Comment sheets were available for residents to fill out as the state agency moves into the final design of the project, based on extensive outreach and coordination related to the evaluation of impacts to wetlands and threatened/endangered species during the development phase.

The current schedule includes adding two lanes to the existing two lanes from Okeechobee Blvd. to 60th Street North, with design completion set for late 2015 and construction to begin in late 2016 — a change that was announced late last year by the state to the chagrin of advocates who wanted the priority to be the link to Northlake Blvd. That part of the project was put off by the state, which expects delays due to an anticipated lawsuit from the City of West Palm Beach.

FDOT currently anticipates construction design of the four-lane extension from 60th Street North to Northlake Blvd. to be complete in late 2016, with actual construction to begin in 2019.

“If we can move the north side of that construction in sooner, we’ll do that, but we don’t have the money to do that yet,” FDOT Public Information Director Barbara Kelleher said. “If we can get the money, that schedule will change.”

In addition to the four-laning, proposals for the southern portion include expanding the roundabout at 60th Street North, and adding two more roundabouts at Persimmon and Orange Grove boulevards, rather than putting in traffic signals.

“With those roundabouts, traffic can still move. Nobody comes to a complete halt, and you don’t have to sit there and wait even though nobody is coming in the opposite direction,” Kelleher said. “Those are two proposals that we are trying to get input from the community on.”

“This is what we’re proposing they would look like,” Kelleher said, referring to a rendering of the walls. “That’s what we want input from the community on. Do you like that? Do you not like that? That’s why we have these design meetings.”

FDOT has also proposed a minor alignment change to the northern section, moving the road farther away from the West Palm Beach Water Catchment Area and nearer to Ibis, which would be separated by the noise wall, and moving a stormwater catchment area.

“We’re moving it away from the preserve, we’re narrowing the median, and putting more landscaping in,” Kelleher said. “This was based on input from previous meetings.”

She said that additional comments and suggestions will come from Wednesday’s meeting, but residents are still welcome to provide input.

“They can still comment to us or give us suggestions from the web site, or they can e-mail us, call us, send us letters. People don’t have to come to this meeting to give us input,” Kelleher said.

She anticipates that other public meetings will be held after the final design phases are done.

“We’ll take all this input and go forward with the design, and before we finalize it, before we get into construction, we’ll undoubtedly have another meeting,” Kelleher said.

The anticipated cost for both phases of the 4.4-mile stretch is $60 million for construction, $8.5 million for inspections, $8 million for mitigation, $1 million for right-of-way acquisition and $3.76 million for the design.

Challengers Making Plans To Take On Incumbents In 2022 Wellington Election

‘Tennis 101’ And More Being Taught At Wellington Camp Program