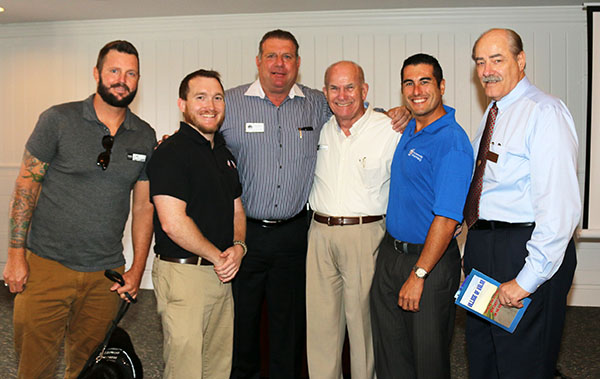 The Wellington Chamber of Commerce hosted a luncheon on veterans issues Wednesday, July 22 at the Wanderers Club. The guest speaker was local veterans activist Ed Tague.

Tague, a 2001 graduate of Wellington High School, was a track, cross country and wrestling star during his WHS days. He was offered a college scholarship, but chose a different path.

His uncle and father, both members of the U.S. Marine Corps, often would tell him stories of their time in the service.

“I want to join the best; I want to be a Marine,” Tague said, informing his father of his decision two months before graduation.

His father, Tague said, promptly shut down that idea. However, he eventually changed his mind.

In October 2001, Tague was off to training in South Carolina. His goal: reconnaissance. He made it, then went on to several specialized schools.

Tague was deployed to Iraq in 2004. In December 2005, upon returning, he studied electrical engineering at Tallahassee Community College. “When I was going to school, my friends said they noticed something about me,” he said. “They said I was a bit more irritable. I would snap at them for the littlest things… I wouldn’t talk to anybody about anything.”

Tague convinced himself that he had made it through the combat zone, and for a year and a half he continued on, before receiving orders that he had been reactivated. His orders were to report for duty with a supply battalion, but it didn’t compute with what he had learned.

“They assigned me to my specific platoon — a military police platoon,” he said.

The military police, he said, often did security checks to find if there were bombs. There weren’t any officers in charge of the platoon.

Suddenly, he became a platoon commander as a sergeant, in charge of 36 Marines, on his way back to Iraq. After the tour in Iraq, Tague was discharged and returned to Wellington.

“My issues started bubbling up again, but this time, they got worse. I started drinking a lot, not sleeping, not having the best of thoughts, getting angry,” Tague recalled. “I didn’t go and talk to anybody — not a soul. The straw that broke the camel’s back was when my father passed away.”

Even though Tague’s father was initially against his son joining the Marines, he became his No. 1 fan.

“He was so proud when I graduated boot camp. When I was overseas, I’d get letters from him every week,” he said.

Eventually, Tague confided in his mother, and finally received the help he needed.

He was terrified, but met an Air Force veteran who had suffered a stroke. The veteran talked through sign language and used grunts to communicate with his wife on the phone. One day, the veteran asked Tague to speak with his wife, translating over the phone.

“His wife just broke down. She hadn’t heard his voice in more than four years. I’m some guy in a psych ward, and I’m helping this guy out,” Tague said. “From that point, something clicked in my head. I got out of the hospital, and eventually, I went back to school.”

At Florida Atlantic University, Tague studied psychology. “I knew I wanted to help other veterans,” he said.

Tague was connected with a national campaign through Palm Beach County. Then, he received a job offer from Faith-Hope-Love-Charity Inc.

FHLC, also known as the Stand Down House, helps veterans who are struggling with mental or physical wounds or illnesses, addictions, homelessness and any other issues regarding returning to civilian life. Stand Down House utilizes a multi-tiered program, including transitional living and collaborative efforts, to help veterans ease their way back into civilian life.

“We get direct referrals from the VA and the Department of Labor,” Tague said, adding that their work is primarily done through grants.

Stand Down House, he explained, is temporary housing for anywhere from three months to two years. “We’ll get them rides to the VA and get them to their appointments, get them vocational training, hopefully get them interview-ready,” he said. “Eventually, they’ll come meet with me.”

This past Veterans Day, FHLC held a groundbreaking for Village of Valor (www.villageofvalor.org), a community for homeless veterans and their families.