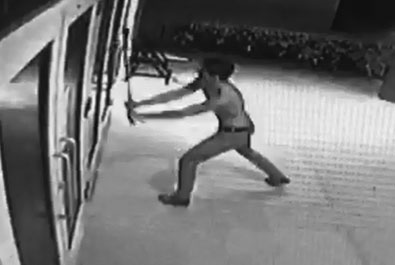 AUG. 2 — The Palm Beach County Sheriff’s Office is seeking the public’s help in finding a suspect wanted for a vandalism spree in Wellington.

The incidents of vandalism occurred on Sunday, Aug. 2 at approximately 2 a.m. The suspect used a baseball bat to commit at least 17 acts of vandalism to vehicles and houses of worship.

The vandalism spree dominated the reports released this week by the PBSO’s District 8 substation in Wellington. Among the incidents:

• The rear window and side window of a 2005 Ford Freestyle were smashed at a home on Exotica Lane, causing $1,300 in damage.

• Someone smashed the double-pane glass entry doors at the Church of Jesus Christ of Latter-Day Saints on Big Blue Trace, causing $1,000 in damage.

• Someone smashed the front door to Temple Beth Torah on Big Blue Trace, causing $500 in damage.

• On Goldenrod Road, someone smashed the front passenger-side window of a 2004 Dodge Dakota.

• On Yarmouth Drive, someone smashed all five windows of a 2006 Ford vehicle.

If you have information on the individual shown in the video still above, or any other information about the vandalism spree, call Crime Stoppers at (800) 458-TIPS.

ABOVE: The man in the video still shown here is wanted by the PBSO in connection with a vandalism spree Aug. 2 in Wellington.