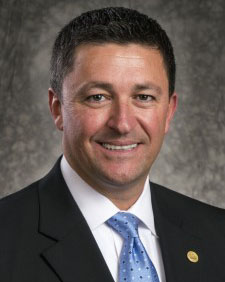 Avossa, hired in April, stressed the importance of collaboration with different communities in order to be successful. “I know that’s the key here at the Village of Royal Palm Beach,” he said. “I want to continue that positive relationship.”

He pointed out some of the positive changes that have come about through collaboration, including the establishment of the new International Baccalaureate program at Royal Palm Beach High School.

“The Education Advisory Board pushed really hard to make this happen,” he said. “I’m also encouraged at what I’m seeing across the community.”

Avossa stressed the importance of having a cohesive strategy for the entire county.

“That’s what I hope to bring to Palm Beach County schools,” he said, explaining that at his former superintendent’s job in Fulton County, Ga., he took the time to listen and learn the issues before leading with a set of strategies.

“Those strategies and ideas may work in one place, but they may not work in another,” he said. “It’s important that we understand first what the real issues are, and then begin to forge an organic way how to solve those issues together, keeping in mind that we’ve got to set some very clear goals for ourselves as a school system.”

As the child of immigrants from Italy, Avossa said he knows the need for hard work and a good education.

“I got a good education right up the road in Brevard County,” he said. “That American dream has really guided me as a teacher, as a principal and now as a superintendent, making sure that whether you’re born in the village right here or you’re an immigrant from another country, we’ve got to be able to provide a world-class education for all of our students.”

Avossa said that he has spoken to more than 5,000 people since he became superintendent.

“Some themes are beginning to emerge,” he said. “Some things we are doing very well and some things we need to be much better at. Those themes will become the foundation of a five-year strategic plan.”

He said the central office seems to have too much control over how the district operates, and that he plans to give principals more autonomy in decision-making with parents, teachers and other staff members.

“We have 180-something schools,” he said. “Some need some things, others need another thing. I don’t think you can do a one-size-fits-all to make that work.”

Avossa believes that there has been too much emphasis on high-stakes testing in Florida. “That’s no different than any other state in the country, but I think we do need to take a more logical approach to that,” he said. “Do we really need a high-stakes test in every subject, every year, every grade?”

He prefers spreading out the testing across subject areas. “Let’s test reading in third grade and test math with high stakes in fifth grade, as opposed to testing social studies every single year, third through eighth grade,” Avossa said.

He said he wants to expand what is available to students, explaining that there is a wide variety of definitions of success.

“I’ve talked to hundreds of students who have told me, ‘It’s either college or nothing for me.’ I said, ‘Well what happens if you don’t get into college?’” Avossa said. “Well, guess what? You’ve got to have a Plan B. I think right now we’ve not been doing a good enough job making sure kids have lots of options for the Plan B.”

Armas said he looked forward to working with the new superintendent in executing his plan.

Armas said he stands behind the school’s mission to truly meet the needs of its students. “We don’t sell our souls to make a grade,” he said. “We do what we think is right for kids and right for Royal Palm Beach High School and this community.”

He said one of the tweaks in the school’s vision recently is to have a safe, respectful, culturally conscious environment. RPBHS has been able to reduce the number of referrals over the past five years from 1,892 in 2011 to 651 in 2015.

“We feel good about our culture and what we’re doing with our kids, and how our teachers are working with our students,” Armas said.

“The bottom line is that when students commit acts that they need to be suspended for, sometimes students need to be suspended,” Armas said. “Our assistant principals take each situation on a case-by-case basis. That number needs to come down, so we’ll be working on that this year.”

“We’re excited about what the superintendent calls personalized learning, that mastery-level learning, which we’d love to be able to do,” Armas said.