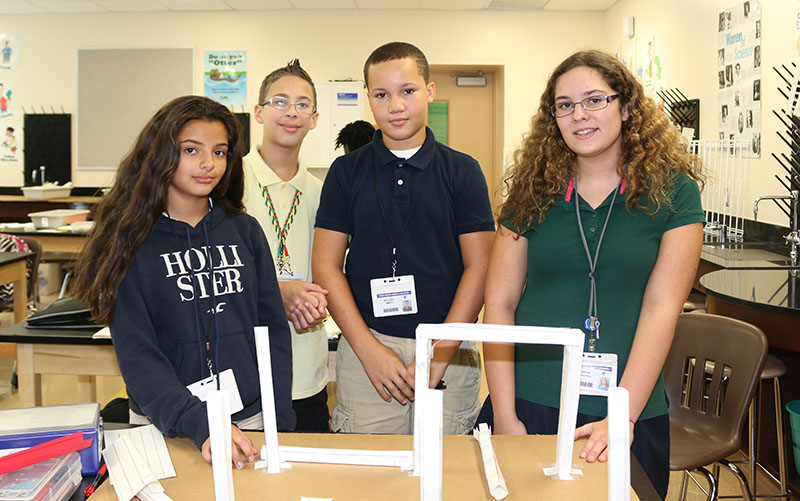 “We’re very excited. This is the inaugural year of our STEM pre-engineering academy,” Principal Dr. Stephanie Nance told the Town-Crier. “With our first year, we wanted to tailor our focus. Obviously, as the program continues to grow, we’re going to look at different options based on the needs, input and feedback of our student academy participants.”

In the future, Nance explained, she and her faculty want to broaden the program. For now, it will keep a more narrow focus.

The STEM students all have the same science, English, math and social studies teachers, in addition to Allison Hill, their STEM instructor.

“Because of the nature of their schedule, and the fact that they’re part of the STEM academy, they travel together as a cohort to their classes,” Nance said, adding that the 48 students are broken into two groups.

More students are interested, and there’s already a waiting list, so Nance expects it to grow once more slots are made available.

When choosing the inaugural class, Crestwood officials looked at several criteria, including student interest and performance data, such as grades, assessment scores, reading inventory scores and more, to develop a well-rounded picture of the whole child, not just academic abilities.

“We’re very excited to continue to build upon the academic vision that Crestwood has always been known for, and to now bring on a STEM academy, that will really help us to identify students who are interested, motivated and want to pursue further studies in math, science, engineering and drafting, and all of those wonderful areas,” Nance said. “We know that, ultimately, the majority of the students who do well in these programs go on to pursue careers, and they do well in those careers.”

As part of the program’s vision, Nance hopes to include a robotics component in the future.

The program fosters interest in science, technology, engineering and math, all of which are global fields. Some of the many projects the students will be engaging in this year include building mouse-trap cars, gliders, bridges and more.

Hill is bringing together all of the subjects the students study through engineering types of activities. She offered one recent project as an example.

“They built barges, and we had them do research. They had to document where they got their research from. We did some simulations on the computer to help them understand sinking and floating and buoyancy,” Hill said. “They built the barges, they tested the barges. They collected data. We spent some time talking about the data and figuring out what it told us.”

Hill guided the students through all the steps of a full scientific explanation.

During the glider project, she said, they will be talking about the Wright brothers, inventors of the airplane. “They’ll be getting into all sorts of aspects with the class,” she said.

This week, the students were working on a marble roller-coaster design. The students will work out the physics behind it, learning about kinetic energy, potential energy and acceleration.

Hill, co-chair of the science department, has been at Crestwood since 1999. She recently finished a master’s degree program at the University of Florida. When the opportunity to be the school’s STEM teacher arose, Hill jumped at the opportunity.

“I am very excited to be getting the kids more immersed into projects. That’s how I teach my class,” Hill said. “It’s a well-sought-after academy. Even now, there are kids in the upper grades who are wishing that they were in the class. The kids are not only going to be doing fun projects, but there’s going to be a lot of learning that’s going to be taking place.”

The students will build a model and test it through a computer program each quarter, and will physically build the models in class, Hill explained. She is looking forward to having the ability to let the students explore and understand things in an atmosphere where they can learn from each other, as well as from their teachers.

The school district, Nance said, seeks to become a district with programs such as STEM, AVID (Achievement Via Individual Determination) and International Baccalaureate aligned along the full K-12 continuum so that students can begin early and continue on through their education, following the various special programs.

“We’ve been working to align our programs here in the Royal Palm Beach area with the elementary, middle and high schools,” Nance said.

Offering such programs at Crestwood Middle School is another step in sequencing the programs offered at the different schools.

Several elementary schools feed into the student population at Crestwood.

“All of the feeder school students will have an opportunity to apply and become a part of the STEM academy here at Crestwood, if they choose to do so,” Nance said, noting that Cypress Trails Elementary School already has a STEM academy.

“Once we establish our program, then those students will be part of our International Baccalaureate program,” Nance said. “Those students will then also matriculate on to Royal Palm Beach High School. We’re excited to be part of that vision, and that will be rolling out for us very soon.”

Utilizing various programs, Nance explained, the school will continue its longtime reputation for exemplary education, and build on it for the future.

“When you look at our data, and I’ll speak to that of Crestwood Middle School, from 2001 to 2012, Crestwood was an A-rated school. In 2013, we went to a B, and in 2014, we were eight points from regaining our A,” Nance said. “Our data speaks, in terms of the programs that we offer. The STEM now is just another step. We understand that ultimately, we have to prepare our students for a very globalized, a very high-tech and very competitive society. STEM is just one way of providing that opportunity.”