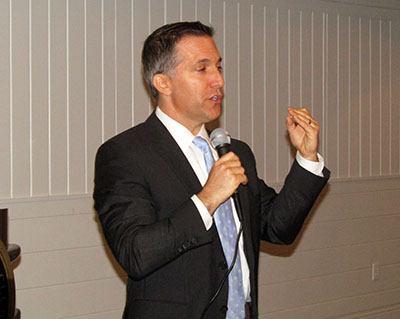 Aronberg asked to talk early at the meeting in order to make a 1 p.m. rally on the Jones case.

He led off his talk with a trivia contest.

“What is the most common crime in Palm Beach County?” he asked.

“Speeding is not a crime, it’s an infraction,” he said. “We only deal with cases involving jail time.”

While the audience pondered answers, Aronberg explained that his office reviews 126,000 cases each year.

“We have 120 prosecutors reviewing 126,000 cases each year. We have 220 professional staff, and we have 100 volunteers in offices throughout the county. The main office is at the downtown court office, shared with the public defender’s office,” Aronberg said. “There are 20 state attorneys throughout the state. Each one of us is independent, meaning that the governor is not our boss. The attorney general is not our boss. One of the most beautiful things about this job is that we are independent, and the only boss we have is you, the people of Palm Beach County.”

He explained that his district, the 15th Judicial Circuit, only covers Palm Beach County, while other state attorney offices cover more than one county.

The answer is driving with a suspended license, he said.

“When you go home today, take solace knowing that many of the people driving next to you don’t have a license, or insurance,” Aronberg said.

Turning back to his reason for leaving early, Aronberg said that the rally outside his office was calling for transparency in the death of Corey Jones, who died Oct. 18 after being shot by a Palm Beach Gardens police officer.

“I can’t tell you specific facts of the case, but I can tell you when there is an officer-involved shooting,” he said.

Aronberg said that his office gets a call right away when an officer is involved in a shooting.

“Law enforcement calls us,” he said. “They call Bill Fraser. He’s here, he’s my lead of investigations. I have a phone next to my bed, and I like to say it’s my ‘Batphone.’ It’s really just an iPhone in a black case, and I think it’s an old iPhone… but it’s on all the time, and it rings whenever there’s an officer-involved shooting. It’s one of the most important facets of this job, if not the most important.”

He said members of his office go to the scene to conduct an independent investigation.

“Bill Fraser leads a separate group of people within our office into a separate independent investigation,” Aronberg said. “In this investigation, we have not only our own office led by Fraser, you have the sheriff’s office investigating. We also have the FBI called in, and they are also investigating. In addition, we are also working with the Florida Department of Law Enforcement, so we have all these different agencies involved.”

He said that there has been criticism that having so many agencies involved will slow the investigation.

“I think the fact that you have different agencies will give the community some solace knowing that there’s different sets of eyes looking at it, that we’re not going to miss anything, that it’s going to be the most thorough, independent investigation possible,” Aronberg said.

He said that the county provided a podium for the Jones rally that he was about to attend, which was reported to have had several hundred angry people.

“I didn’t want anyone to think that I was hiding, that I was trying to hide from the people who I am the state attorney for,” he said.

Aronberg said that it is important for voters to have faith in the people who represent them. His current post is a lot different than his previous job representing voters in Tallahassee.

“The only thing that I will stress is that I’m not a state senator anymore, so I can’t do what my instincts are, which is to talk about everything,” Aronberg said. “I want to speak about every fact of the case, but I’m not allowed. It’s a different role. This is the state attorney’s office.”