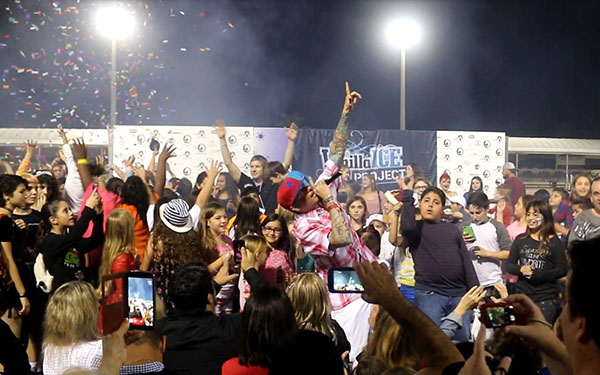 The Wellington Chamber of Commerce and host venue/presenting sponsor the Palm Beach International Equestrian Center are gearing up to present Winterfest 2015 on Saturday, Nov. 28.

Wellington Chamber of Commerce Executive Director Michela Green is anticipating a bigger and better Winterfest than in years past.

Palms West Hospital and the Children’s Hospital at Palms West, Chukker.TV and the Grand Champions Polo Club will be sponsoring the Kids Winter Wonderland Village, Green said, which is sure to delight and entertain.

Local philanthropist, television star and music star Vanilla Ice, of the Emmy Award-nominated The Vanilla Ice Project, will once again be the featured headline performer.

After his performance last year, he remained on stage to take pictures with anyone who asked. Kids and adults alike sang along with Vanilla Ice as he took to the stage as a seasoned performer.

“Each year, he astounds us with his generosity and enthusiasm for this event,” Green said. “He truly is an asset to Wellington and to Winterfest.”

Wes Kain, a television personality also from The Vanilla Ice Project, will serve as the honorary master of ceremonies. Local talent such as Michaela Paige from The Voice, Nicky Greed, Alyssa Coon, Angeline Fontaine, Sarah Spiritual and others will take to the stage to entertain audiences, Green said.

The Royal Inn Hotel will serve as the title sponsor for the event that attracts more than 6,000 people from the local community, she said.

In addition to the carousel and other special activities at the Palm Beach International Equestrian Center, there will also be an ice skating rink on site from 5 to 9 p.m., and Santa will be visiting at the Kids Winter Wonderland Village.

Bethesda Health is sponsoring the snow, and Self Discovery Life Ministry is the commemorative brochure sponsor. My Community Pharmacy is the photo booth and physicians reception sponsor. Media sponsors include Chukker.TV, Talk4Media, Wellington The Magazine, the Town-Crier and LocalDines.com. Cravy is the red carpet sponsor. Palmbeachsports.com and Bethesda Health are also sponsors of Winterfest 2015.