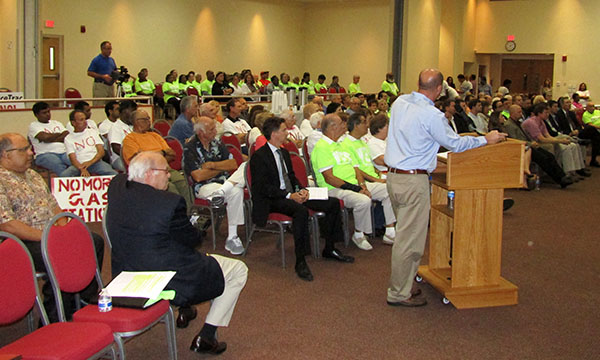 The Royal Palm Beach Village Council last week set another hearing for Dec. 3 to get more information about a proposed RaceTrac gas station at the corner of Royal Palm Beach and Southern boulevards.

The requested information included a market analysis by the applicant, a traffic letter from Palm Beach County regarding the number of gas pumps and a traffic study of the area with a particular focus on schools. The council also requested an analysis of projected crime anticipated as a result of the RaceTrac project.

Several hundred residents, both for and against the proposed gas station, attended the meeting. Many of them spoke at the meeting, which ran for more than three hours.

The hearing was postponed from the Oct. 15 council meeting because so many people attended that an attorney representing those opposed to the station objected because everyone could not hear the proceedings. The Oct. 29 meeting was held at the Royal Palm Beach Cultural Center, which holds more people.

According to a staff report, the proposed gas station meets all requirements of the village. Staff recommended approval of the application, which also received approval by the Royal Palm Beach Planning & Zoning Commission in September.

RaceTrac is seeking site plan and architectural approval to develop a 5,928-square-foot service station, which requires a special exception within the general commercial zoning district.

The site consists of two parcels of land, a vacant tract at the corner and the shuttered TD Bank site. The service station would include 10 pump islands with 20 dispensing pumps, and a canopy over the pump islands. The plan allows for the 30-foot queuing space required by village code.

Primary access to the site would be provided from a right turn off of Southern Blvd., with a secondary access from Royal Palm Beach Blvd. Both of the access points would be limited to right turns in and out. There would also be several cross-access points from adjacent buildings.

The site is 2.41 acres and exceeds the minimum area required for general commercial zoning, which would allow up to 40,000 square feet. The proposed building conforms to the design standards, and provides 34.7 percent of the site as pervious area, which exceeds the minimum 25 percent required by village code.

Royal Palm Beach Planning & Zoning Director Bradford O’Brien said that the applicant has added more earth tones to the color scheme, making it more subdued than a typical RaceTrac station. The project would include additional landscaping, and a large banyan tree on the site will be preserved.

Agent Brian Terry of the Wantman Group, representing RaceTrac, said that the company has been operating since 1934 and has more than 160 locations, with more than 60 in development in Florida. It employs 2,700 people in Florida and has 20 to 24 employees at each location, with four to six on staff at all times.

Terry pointed out that the site is completely within a commercial area, and the new station would replace one that had to be torn down during the widening of Southern Blvd.

The closest home is about 1,000 feet away, Terry said, adding that lighting will be set up so it will not be seen off the premises.

RaceTrac attorney Gary Brandenburg said that the applicant has met all the requirements of the village through expert testimony, and that complaints made against it do not meet the burden of evidence.

During public comment, Dan Splain of the NRI Institute of Health Sciences in the Royal Plaza shopping center across the street from the site represented himself and 28 other business owners in the commercial area. He said the gas station is needed to replace two others that had to close when Southern Blvd. was widened.

“The gas service is much needed to accommodate the many business owners, tenants and employees in the immediate surrounding area, and the hundreds of customers who come to our businesses each and every day, and the hundreds of hotel guests who utilize the services of the Royal Inn,” Splain said. “We currently have to drive two miles in either direction in order to purchase gasoline.”

He added that the area has been zoned commercial in the village’s master plan for more than 50 years, and gas stations have always been a permitted use.

“This gas station, from what I have seen tonight, is a very beautiful facility, and I think it will add to the area as it exists today,” he said. “It is on a major eight-lane highway with zero negative impact on any residential areas, and RaceTrac will have low prices.”

Attorney David Markarian, representing several residents opposing the gas station, said the most important question is whether the application complied with the village’s comprehensive plan.

“The village and this body is entrusted to ensure the that new development does not, according to the comprehensive plan, negatively impact the existing neighborhood and uses, and perhaps more importantly, not diminish the community character, particularly to special exceptions,” Markarian said. “Just because an applicant says it’s OK or there’s a permitted zoning use, doesn’t actually answer or eliminate any further questions.”

Markarian added that residents, although they may not be expert witnesses, are entitled to speak about what they think makes the village a desirable place to live. He questioned if residents had been afforded sufficient access to traffic studies regarding whether the station has 18 or 20 pumps planned, and when the studies by the applicant showing no impact on residential property values were done.

Former Planning & Zoning Commissioner Barbara Powell said that she thought the applicant had done a good job trying to meet the requirements, but that they have not met the requirements for consistency with the comp plan.

Webster also pointed out that the applicant’s traffic study acknowledged that the roadway level of service would deteriorate, and added that no report on crime in the area had been submitted.

Comment cards were read for people who did not wish to speak, with approximately 100 against and 50 for the gas station.

Vice Mayor Richard Valuntas asked about the traffic level of service, and Village Manager Ray Liggins said that there is an updated traffic report and a final report from the county.

“The report has the intersection failing before they get there,” Liggins said. “After the improvements are made, and they add their traffic, they get an acceptable level of service.”

Valuntas added that they did not yet have an updated traffic report with 20 pumps, and Terry said that his client would accept a condition for 18 pumps until the report has been updated.

“The mixture is critical from a planning perspective and from an economy’s perspective that you have a combination of those services within proximity to the residents of the community,” he said.

Councilman David Swift showed a map with a 2.5-mile radius of the proposed RaceTrac. “I count 15 stations there,” Swift said. “Can the applicant tell me why the village needs another 24-hour gas station/convenience store?”

Terry explained that market need was not a criteria that they must prove in the application process. “It’s not a basis for approval or denial,” he said.

Swift asked why RaceTrac chose that particular location and how it fits into the company’s business model, and Terry said that RaceTrac has been unfolding a new business model.

“This neighborhood business concept for their new stores, they’re doing them within the communities that really make the most sense to service the public,” Terry said. “It’s a historically commercial corner. It has always been that. We locate in that proximity, so the community can take advantage of the services offered, and that is good quality gas and good quality convenience.”

Swift said that this was the first opportunity for many residents to hear the facts about the gas station. “Quite frankly, I’d like to slow the process down,” he said.

Village Attorney Jennifer Ashton said that if the council thought there were further studies they needed to make a decision, they have the authority to send it back to the Technical Review Committee or the Planning & Zoning Commission.

“This needs, in my opinion, to cook a little longer so these residents can see that this is a project that they can live with,” Swift said.

Councilmen Jeff Hmara and Fred Pinto agreed that everyone should have the opportunity to provide input and that the council should be sure it has all the necessary information.

Terry agreed but said that there are business components and timelines that they need to try to work with from a contractual standpoint.

“We believe 30 to 45 days we can be within that range to try to bring this back,” he said. “We will be very diligent on our end to be sure that we work with staff to do the work that we need to do on our side to bring that forward.”

Mayor Matty Mattioli agreed that there were some unanswered questions, and suggested that council members meet individually with the manager to have specific questions answered.

Swift made a motion to continue the hearing to Dec. 3, which carried unanimously.

ABOVE: Supporters and opponents of the proposed RaceTrac gas station listen to the proceedings at last Thursday’s public hearing, held at the Royal Palm Beach Cultural Center.