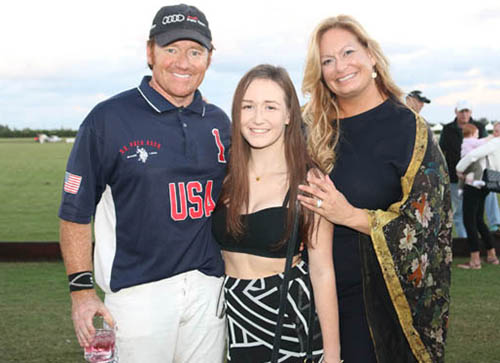 The USPA International Cup polo game and the Carlos Gracida Memorial Legends of Polo match will once again take place at the Grand Champions Polo Club in Wellington on Saturday, Nov. 28.

Gates open at 12:30 p.m., with the legends game at 1 p.m. and the international game at 3 p.m. ChukkerTV will be live streaming both games with commentary from polo broadcasters Toby Wayman and Dale Schwetz.

In February 2014, the polo community lost a great player, friend and family man in Carlos Gracida. The Ganzi family, owners of the Grand Champions Polo Club, renamed the club’s Legends of Polo game to memorialize their close personal friend and fellow polo player.

“Memo, Carlos’ brother, is so honored to be participating in this. His son usually plays in the international, but this year he’s going to be playing in the legends game,” Grand Champions President Melissa Ganzi said. “They’re honored to play in it.”

Carlos Gracida, she said, played in the Legends of Polo tournament, making it even more special that his family members will be playing.

“I’m glad that Memo is participating in it. I think it is even more meaningful that his brother and son are involved in it,” she said. “Carlos played in it three years ago before he passed away. This makes it all the more special and meaningful for Carlos’ memory.”

Last year, son Carlitos Gracida was unable to play, since he was recovering from appendix surgery.

“Having Memo participate this year is an honor and a privilege. Memo and Carlos, even though they’re Mexican-Americans, they really shaped American polo,” she said. “They’re both members of the Polo Hall of Fame, and I think that speaks unto itself.”

For the fourth time in the USPA International Cup’s nine-year history, it is being held at Grand Champions, with this year’s international team coming from South Africa to play.

“It’s really exciting. The goal level is going to be raised this year. It’s going to be 24 goals, which is a high-goal match,” Melissa Ganzi said. “South Africa has been wanting to come for a number of years, and we were finally able to get it together with them for this year.”

“It’s going to be all new players, and new for our American team to play against,” she said.

The South African team will come to Wellington about a week before the tournament to familiarize themselves with the field and horses, and get settled in.

Polo truly is a passport to the world, introducing players to those from other countries.

Ganzi is excited to show the team her Wellington community and all of the polo fields and equestrian amenities that are available here.

“What a great equestrian haven this place is. It’s amazing. With the horse show and the polo facilities, what a great place it is for equestrian enthusiasts,” she said. “In such a small area, we have so many polo fields.”

English players, she said, were impressed by the proximity of fields, and she expects that the South African team will be amazed as well.

“We’re so thrilled to be doing it again,” Ganzi said. “We have Tito’s Handmade Vodka on board as a sponsor this year, so that is exciting.”

Ganzi is looking forward to the games, which take place after Thanksgiving, and on the same day as Wellington’s Winterfest — a special event sponsored by ChukkerTV and others, featuring musician and television star Vanilla Ice at the Palm Beach International Equestrian Center.

“This year is going to be a special year,” Ganzi said. “I haven’t seen any of these South African players play. I’m looking forward to that… I’m sure there’s going to be a great match. It just seems every year it’s getting more competitive and better. This is our fourth year of the international. We’ve had four different countries, and we’ll have to start looking forward to next year.”

General admission tickets are $20 per person. Various tailgate packages are available, including the Signature Tailgate Package for $250, which includes admission for one car, guests, a reserved spot with a field-side view of the game, a 10-by-10 tent, a table with chairs, a bottle of champagne with glasses and ice, and four Grand Champions Polo Club/ChukkerTV hats.

The Grand Champions Tailgate Package for $500 offers the benefits of the signature package with a preferred tailgate spot. VIP pavilion tickets are available at $200 per person and include admission to the Tito’s Handmade Vodka Lounge, which provides a field-side view of the game and specialty food and drink by Ken-Rose Catering.

Sponsorship packages are still available, including a $1,500 VIP Corporate Sponsor package, which includes a table and eight VIP tickets to the Tito’s Handmade Vodka Lounge.

For tickets, tailgates and sponsorship opportunities, call (561) 644-5050 or visit http://grandchampionspoloclub.ticketleap.com/the-international-cup-tournament-2015.

The tournament’s proceeds benefit the Museum of Polo and Hall of Fame, a nonprofit educational foundation dedicated to increasing appreciation for the sport, preserving the history and tradition of the game, and honoring those who have made outstanding contributions to the sport.

To learn more about the tournaments and other events taking place at the Grand Champions Polo Club, visit www.gcpolo.com.