There was a lot to celebrate at a party hosted by the O’Donnell Agency on Nov. 12.

The advertising, public relations, design and digital media agency marked 20 years in business, the opening of its third office in Sarasota and the unveiling of its new ground-floor headquarters at the corner of Banyan Blvd. and Olive Ave. in downtown West Palm Beach.

More than 100 friends, clients, colleagues and community leaders attended the festivities and enjoyed cocktails, hors d’oeuvres and live music. A highlight of the evening was a video projection on the lobby wall that provided guests with a walk down memory lane.

Clips of O’Donnell’s work over the past two decades included these projects: the launching of Fiji water in 1995, the opening of CityPlace; the ribbon-cutting for the Max Planck Florida Institute for Neuroscience, the Red Bull snowboarding competition in downtown West Palm Beach and the groundbreaking for the Riviera Beach Marina Village.

In honor of its 20th anniversary, the O’Donnell Agency made a donation to the Lord’s Place to support its Ending Homelessness Breakfast.

From its early beginnings in 1995 to today, the O’Donnell Agency has shown two decades of constant creativity and innovation. The firm is ranked among the top 10 public relations firms in Florida by revenue, and among the top 115 in the nation.

It has won numerous national and regional awards for advertising and public relations campaigns, including more than 50 American Advertising Association awards and the prestigious MAXI Award from the International Council of Shopping Centers. 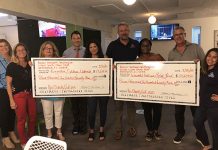