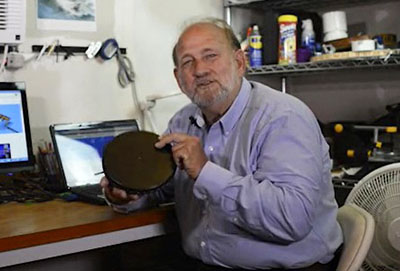 On Jan. 15, Ray Tilson will launch his first Kickstarter campaign to sell his creation, TakeA360, that allows anyone to create an animated GIF file of any object up to 200 pounds and upload the file to various outlets.

“I created TakeA360 to simplify the process of making animated files for anyone from a novice to the expert. This process will also allow the creator to own their images,” Tilson said.

Tilson created the process while using the Irisize Imaging tool that is used by Hollywood producers. The process combines Java script and 3D animation.

Tilson began his professional career as a code writer in the early 1980s, creating code such as “How to dial a comport,” which was the ATDT code sent to open a modem.

“I’m pretty much self-taught,” Tilson said. “I took two computer lessons and four days of professional programing. Computers were easy for me. I played around with them, and within four days I was writing my own code.”

From there, his skills grew and he soon was in a computer club with members that included code writers from IBM graphics, Eckerd Drugs, Seimens Telecommunication and the NYSE.

Tilson doesn’t fall far from the tech tree. His father was an expert in electronics for the space industry and was one of many called in to help rescue Apollo 13. As a teen, Tilson and his brothers assembled relays that were used to drive multiple flights to the moon.

“Growing up, my father worked at the Kennedy Space Center,” he said. “We had unlimited VIP access to NASA and the Space Center.”

TakeA360 is a manual, transportable unit. There is also a threaded nut for mounting a larger platform to use with bigger objects. For more information, visit www.takea360.com or call (561) 685-7515.

ABOVE: Ray Tilson with his creation.