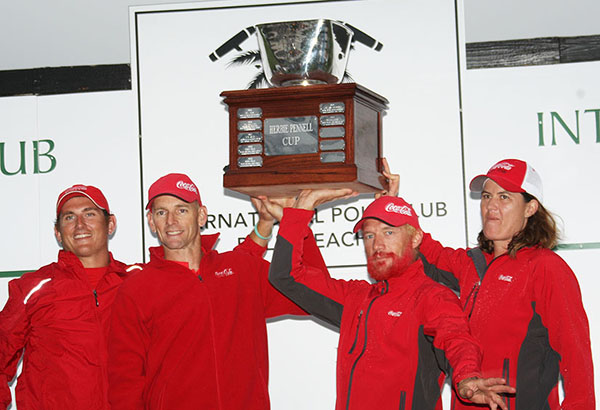 Coca-Cola team captain Gillian Johnston scored the winning goal in the final of the Herbie Pennell Cup tournament on Sunday, Jan. 3, to the delight of an enthusiastic opening day crowd at the International Polo Club Palm Beach in Wellington. Coca-Cola edged past Villa del Lago 15-14.

Villa del Lago (Jim Zenni, Guille Aguero, Hilario Ulloa and Agustin Obregon) was making its fifth finals appearance in the season-opening 20-goal Herbie Pennell Cup, and after racing out to a 9-4 halftime lead, they looked to be assured of victory.

Ulloa scored the first goal of the day in the opening 90 seconds of play, and followed it up with a second goal from the field at the 2:51 mark for a 2-0 Villa del Lago lead. Julio Arellano finally got Coca-Cola (Gillian Johnston, Sugar Erskine, Julio Arellano and Steve Krueger) on the scoreboard on a pass from Erskine following the throw-in. A Coca-Cola foul with just 26 seconds left in the period sent Ulloa to the penalty line, where he converted from 30 yards for a 3-1 Villa del Lago advantage.

Another Coca-Cola penalty opened the second chukker with Ulloa converting from the 60-yard mark, making it 4-1. Two minutes later, Krueger scored on a pass from Erskine, cutting the Villa del Lago lead to two goals. Obregon scored the final goal of the period, and Villa del Lago left the field at the end of the second chukker on top of a 5-2 lead.

Obregon’s second goal of the day came on a pass from Ulloa just 32 seconds into the third chukker and extended the Villa del Lago lead to four goals, 6-2. Ulloa followed it up with a 60-yard penalty goal just a minute later, and his second goal of the period had Villa del Lago in front by six goals, 8-2. Coca-Cola rallied with consecutive goals from Krueger and Arellano, making it 8-4, but it was Ulloa’s seventh score of the match, on a 40-yard penalty conversion, that had Coca-Cola trailing by five goals, 9-4, at the end of the first half.

Coca-Cola regrouped at halftime and entered the fourth chukker on attack mode. Erskine and Aguero exchanged goals before consecutive goals from Krueger and Johnston ended the period with Coca-Cola closing to within three goals of the lead, 10-7.

The momentum had shifted as Arellano scored the first two goals of the chukker on a 40-yard penalty conversion and a goal from the field. Coca-Cola cut the lead to a single goal, 10-9, as Villa del Lago was struggling for an answer. Aguero scored his second goal of the game in an effort to stop the bleeding, making it 11-9, but there was no let up from Coca-Cola. Krueger notched his fourth goal of the afternoon, followed by a goal from Erskine, who scored from the throw-in to tie the game at 11-11. Ulloa broke the tie with 21 seconds in the chukker to put Villa del Lago back on top, 12-11.

A determined Villa del Lago foursome took the field in the sixth on a mission. Villa del Lago had been to the Herbie Pennell final for the last four years and walked away without the title. This time, they were determined to take it home. Consecutive 40-yard penalty goals from Ulloa stretched Villa del Lago’s lead to three goals, 14-11, with 4:41 left in regulation play.

Arellano responded with a 40-yard penalty goal of his own, making it 14-12, and a goal from the field from Krueger had Coca-Cola within a goal of the lead, 14-13, with two minutes left to play. A costly Villa del Lago foul allowed Arellano the opportunity to tie the game with 1:05 remaining on the clock. The conversion leveled the game at 14-14 and a possible sudden-death overtime. However, Coca-Cola took control of the throw-in and a pass downfield found Johnston on a run. Approaching the Villa del Lago goal and racing at a full gallop toward the end line, Johnston unleashed a severe cut shot that found its way through the goalposts for the 15-14 win and Coca-Cola’s third Herbie Pennell title.

Action at IPC resumes this weekend with the opening games of the Joe Barry Memorial Cup. Learn more at www.internationalpoloclub.com.