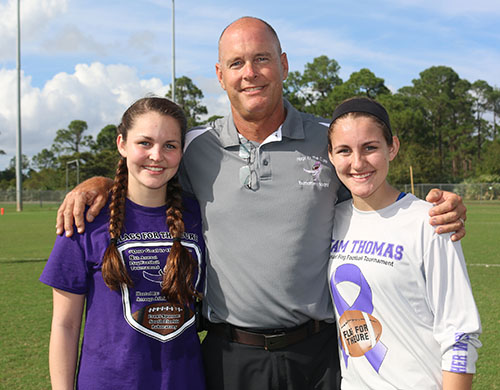 Tournament Director Keith Shivers is excited to be helping organize the popular annual tournament, where people play hard to help win the battle against cancer.

“For the first five years, we donated to the Susan G. Komen Foundation,” he explained. “For the past four years, we’ve been donating to the American Cancer Society.”

The event started out as a girls tournament, but has since grown and evolved to include boys and adults as well.

“At this point, we have pretty much all age groups covered, men and women,” Shivers said. “The men’s open division has probably been the largest growth area recently; there are established leagues in the age group around the state. We’re a little spoiled here in The Acreage with the girls program, one of the few all-girls [programs] in the area.”

Registration is closed, but roster changes can take place until the games start. The 60 registered teams this year will begin playing on Wednesday, Jan. 6 with games starting from 6 to 9 p.m. Thursday and Friday will follow the same schedule, with games beginning at 8 a.m. Saturday and going until 8 p.m., and then starting at 9 a.m. Sunday and running until 2 p.m.

During the tournament, there will be a formal opening ceremonies event at 11 a.m. on Saturday, with a check presentation and a ceremony where cancer survivors and those who have passed away are honored.

The ceremony lasts about an hour, and then the games continue.

Over the years, many teams have been formed to honor, or play for, local cancer survivors and patients.

“We have a couple of them every year,” Shivers said. “There’s always a few teams out there playing for somebody, not necessarily in honor of, but in support of.”

In addition to registration fees, the organizers and participants help raise money to fight cancer through sponsorships, raffle items and snacks. Raffle item donations can be made by contacting Stephanie Defazio at (561) 891-8093.

The kitchen will be open for breakfast, lunch and dinner over the weekend, Shivers noted, with drinks and food (likely pizza) during the week.

The tournament attracts local players, many with personal ties to cancer.

“We have a lot of people who come out to the park who don’t normally end up out there,” Shivers said. “Just the fact that cancer does touch so many people’s lives, it gets us outside what we normally call ‘the park families’ and draws more people in for the fact that we’re raising money to cure cancer.”

Dawn Herron, who is in charge of registration, explained that at least five or six teams are in honor of someone, and many of the teams that come back year after year are typically participants because cancer has touched their lives.

“There are at least 10 teams either with someone close, or someone with family members either going through it or who have passed away,” she said.

ABOVE: Keith Shivers with daughters Sydney and Kylie at last year’s tournament.