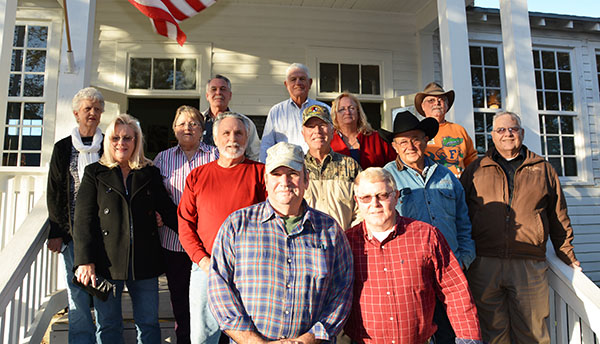 Yesteryear Village at the South Florida Fairgrounds is once again going to be the home of a reunion for former students of the historic Loxahatchee Groves Schoolhouse, originally located on Tangerine Drive before being moved to the fairgrounds.

The second annual reunion will take place Tuesday, Jan. 26, starting at 6 p.m., with a meeting at the schoolhouse for a group photograph, a meet-and-greet and refreshments at the nearby Bink Glisson Historical Museum.

Prior to becoming an official reunion, relatives and friends of Loxahatchee Groves Vice Mayor Ron Jarriel would meet during the fair.

Last year, approximately 25 former students joined in for the reunion fun to reminisce and chat about old times.

“This year, we’re hoping for a bigger turnout,” said Sharon Jarriel, Ron’s wife. “It’s a group of former students getting together and trying to reconnect with ones who went to the school years ago.”

The school, tiny by modern standards, closed in 1965. The students were moved to schools in West Palm Beach.

“I’ve lived here for 54 years. I moved here when I was 10, but my cousins went to school there way before I got here,” Ron Jarriel recalled. “Finally, when they were going to tear it down, they decided to take it to Yesteryear Village because it is a big part of the history of Loxahatchee Groves.”

Times were simpler back then, when Jarriel was a student in the building.

“I went there for the fifth through the sixth grade. It was totally different. We didn’t have computers, when the teacher would teach one class, the other class would go on a field trip or keep themselves occupied outside. It was very simple. We had fun; we didn’t have fights. It was just a big part of living in Loxahatchee Groves,” he said.

As the years have passed, its former students have grown up, lived their lives, become senior citizens, and some are no longer around.

“We lost a lot of school members. Just recently, in the last few years, we’ve started having reunions at the fairgrounds,” Jarriel said. “We’re all getting older.”

A veteran of the Vietnam War and a longtime leader in the Loxahatchee Groves community, Jarriel is proud of the old-fashioned education he received at the school.

Brenda Harms Kilgore, who attended summer camp at the schoolhouse, and whose four siblings attended classes there, is working to compile a contact list for former students. “We would all go there for recreational programs,” she said.

Tracking down former students has been difficult, she explained, but word has gotten out on social media. “We’re hoping to double that 25 we had last year, maybe even get 50,” Kilgore said.

The school was split into two classrooms, she explained, one for first through third grade, and one for fourth through sixth. For three years, students were taught by one teacher.

The organizers don’t know how to contact many of the people. “Some people I haven’t seen since high school,” she said. “It was good to see them, but we’d sure like to get a lot more people involved. Some we see on Facebook, so that helps, but it sure would be great to see them in person.”

Details of the reunion are available through private Facebook group at www.facebook.com/groups/604213566347488.

Fair admission is necessary to enter the schoolhouse. Advance senior tickets are available for $7, or at the gate at $9. Organizers are collecting addresses, phone numbers, e-mail addresses and contact information for anyone who attended the school.

ABOVE: Alumni of the historic Loxahatchee Groves Schoolhouse at last year’s reunion. Organizers are trying to find more participants this year. Photo by Denise Fleischman