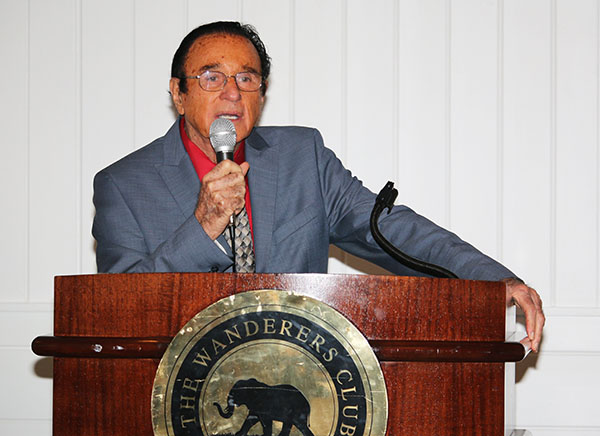 Dr. Burton Feinerman, president and CEO of Stem Cell Genetic Med, was the guest speaker at the Wellington Chamber of Commerce’s January luncheon at the Wanderers Club on Wednesday, Jan. 27.

“I think a lot of the people who are here today are here not because of the wonderful luncheon, as much as they have some interest or questions,” Feinerman said. “Often, when I’m in a group of this size, there will be at least 15 or 20 people who have a friend, a relative, some connection with someone who has some of the serious, incurable diseases that I do treat. There’s usually a lot of personal interest in this.”

Feinerman, who has been in medical practice for 62 years, has spent most of his career in Florida. He is a graduate of New York Medical College and trained at the Long Island College Hospital in New York, then the Mayo Clinic in Minnesota. He was the chief of medicine for the U.S. Army in Germany, chairman of medicine at Miami General Hospital, and chairman of Cancer Technologies, Kids Medical Centers of America and Anti-Aging Medicine Technologies.

Feinerman started out as an innovator.

“I opened up the first African-American hospital in Dade County,” he said, explaining that in the 1950s, the medical field was different from what it is today, especially in the south. “That’s how I started off my career in Miami.”

Another highlight of his career, he said, was when a mother brought a young infant into his office. The child, he explained, eventually became known as the “bubble child.” The baby was born without an immune system, had a blood transplant, and lived. Now, the child, as an adult, is a teacher in a high school in south Miami.

Feinerman began to get restless, and started practicing in Hawaii, where he stayed for 15 years. He learned cosmetic dermatology, anti-aging medicine and stem-cell science.

“That’s where I am today. It has been a journey where I’m constantly learning new things, battling the establishment — which seems to be a habit of mine — and it has been exciting and wonderful. The patients I deal with,” he said, “often, it’s like a 15-minute conversation before they say, ‘When can I have the treatment?’”

Feinerman deals in an experimental and often controversial area of medicine. Stem cells, he explained, are challenging the future of medicine and incurable diseases, but are here to stay.

Stem cells can be utilized to treat various diseases, ailments and medical issues, he explained, with applications for erectile dysfunction, kidney function, anti-aging and recovering drug addicts, with the bulk of his work on incurable diseases such as ALS, Parkinson’s, Alzheimer’s, multiple sclerosis, traumatic brain damage, autism and more.