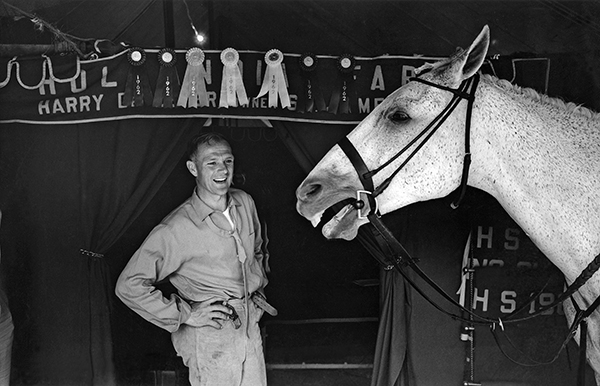 The Equestrian Aid Foundation will host an outdoor film screening under the stars on Sunday, Feb. 21 starting at 6 p.m. at the Global Dressage facility (13500 South Shore Blvd., Wellington).

Settle in this Sunday night with a blanket or chair on the lawn for an advance outdoor screening of Harry & Snowman, a true story about one man and his remarkable connection to a horse he rescued off a truck bound for the glue factory.

This screening is a unique opportunity to watch the film prior to its forthcoming release. VIP tickets and tables are also available, and those guests will enjoy a deluxe buffet dinner catered by the Palm Beach International Equestrian Center’s White Horse Fashion Cuisine. General admission ticket holders will watch the film under the stars. Children under seven will be admitted free, and the foundation is offering discounted rates to local 4-H groups, pony clubs and other organizations.

Harry & Snowman, an award-winning G-rated feature length documentary, centers on the equestrian career of Harry deLeyer, a Dutchman who immigrated to the United States after World War II, and his famous horse, Snowman.

Unlike the finely bred Thoroughbreds that populated the show ring in those days, Snowman was an old Amish plow horse who was discarded at a Pennsylvania auction. Less than two years after Harry rescued Snowman for a mere $80, they rose to national prominence, winning Grand Prix classes and national championships against the very horses and riders who once looked down their noses at them.

The true heart of the film is not just the Cinderella story, but the lasting friendship that develops between Harry, Snowman and the entire de Leyer family. The film features interviews with Harry, his family and notable horsemen of the day. It is anchored by present-day footage of Harry, now 86, still living and working on the show jumping circuit, as well as footage of him from the 1970s from a previously unreleased documentary.

Harry narrates his love story with Snowman, through the use of extensive archival footage and more than 1,200 never before seen photos, including lost Life Magazine photo shoots. Snowman appeared on the most popular game show of the 1960s, To Tell the Truth, and on The Tonight Show, where Johnny Carson used a ladder to climb onto his back. He had his own fan club, he was profiled twice in Life Magazine, and has been the subject of three bestselling books, including the 2011 New York Times bestseller, The Eighty-Dollar Champion by Elizabeth Letts.

Categorized as “docutainment,” a combination of documentary and entertainment, the film was produced and directed by West Palm Beach resident Ron Davis. The film has played at 18 festivals across the U.S. and won 10 audience awards. “This film was produced to capture the human spirit of friendship, family and competition,” said Davis, owner of Docutainment Films. “I love making films about inspiring true stories that take the audience on a full emotional journey, as they watched average people live through extraordinary circumstances.”

The evening will benefit the Equestrian Aid Foundation, a local nonprofit supporting horsemen and equine-related professionals suffering from illness or catastrophic injury. Touched by deLeyer’s positive efforts to enhance and enlighten the equestrian community, the EAF will be honoring him with this year’s Luminary Award.

“We are proud to present a true love story between horse and man. Thanks to director Ron Davis, we are able to share this unique evening with you all,” EAF President Stephanie Riggio Bulger said. “Mr. deLeyer has been an inspiration since I was a young rider on Long Island. It is my honor to present him with the Luminary Award and thank him for all he has done for our sport.”

To purchase tickets to the advance film screening of Harry & Snowman, visit www.harryandsnowman.eventbrite.com.

ABOVE: The film Harry & Snowman features vintage photography and archival footage of rider Harry deLeyer and his horse. Photo by Bill Ray