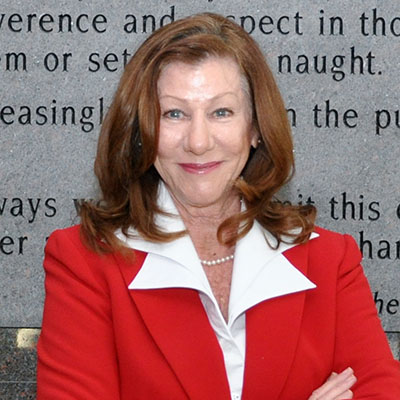 Former Councilwoman Martha Webster is seeking a return to elected office in Royal Palm Beach in her current run for mayor. She faces Councilman Fred Pinto in her bid to take over the gavel from retiring Mayor Matty Mattioli. The election will take place Tuesday, March 15.

Webster recently sat down with the Town-Crier to explain why voters should choose her to be Royal Palm Beach’s next mayor.

Webster is no stranger to Royal Palm Beach politics. She served on the council from 2008 to 2013, including a stint as vice mayor in 2010.

In 2013, she lost her seat to Councilman David Swift. In 2014, she ran for mayor, coming in third in a four-way race. In 2015, she ran unsuccessfully against Swift to get her old seat back. This time, Swift is supporting her in the race against Pinto.

“I’ve lived here in the village for 20 years, and I’ve lived in the county for 50 years. I’ve been retired from the University of Florida since 2011. I worked for them for 11 years,” Webster said. “I did the 4-H youth program and a nutrition program. I was director of those programs. I wrote grants and trained people.”

For two years, Webster worked for the United Way as the director of community initiatives for Palm Beach County, and for four years worked as director of housing for Consumer Credit Counseling over a three-county area, where she did home buyer education to prepare people for homeownership.

“I was a stay-at-home mom before that,” she said, ranking being a wife and a mother as her top accomplishments. “I have quite a few accomplishments as a volunteer and as an elected official.”

Webster is particularly proud of the work she did representing Royal Palm Beach regionally. “When I was on the council here, I jumped out to learn as much as I could, joined the League of Cities and was elected by them to the second vice chair, and the first vice chair. I headed a number of committees,” she said.

Webster held positions with the Palm Beach County League of Cities, and served on committees at the state level. At the Treasure Coast Regional Planning Council, she was elected to the executive board as the secretary/treasurer and then vice chair.

“I would say that I get in, I work with the group, understand what their objectives are, and they see I have leadership skills,” she said.

Those skills, her knowledge of the county and village, and her belief that Royal Palm Beach needs to get closer to the residents are the reasons why Webster believes that she is the best person to serve as mayor of Royal Palm Beach.

Her top goal to achieve over the next two years is reaching out and involving more residents in the decision-making process, Webster said.

“Besides just involving them, I have been spending a lot of time with residents and speaking with them, and I know that there are some specific concerns within the communities,” she said. “I’d like to really get down to the table and see if we can help resolve some of these.”

For example, there are issues with speeding on Sandpiper Avenue, noise from Royal Palm Beach Commons Park, and people wanting to see more policing within the communities.

“I’d like to bring civility and order back to the dais. I think that, again, it has not been very receptive to the residents,” Webster said. “I’d like that dais to be friendly so that when people come, and they address it, they feel like they’re being listened to.”

Webster, who worked with Village Manager Ray Liggins for five years, is looking forward to working with him again as mayor.

“He, too, could reach out more to the residents, and I think the residents have said themselves, that they didn’t feel he was too open to when they called or spoke with him, but I think that’s something we all work together at,” she said. “He’s working with a mayor and council, currently, where that’s not their focus, and they don’t encourage him to do that.”

Webster believes that council meetings are not currently being handled well.

“There isn’t enough input. It’s not that they don’t allow residents to come and speak, it’s that they don’t respond to their speaking,” she said. “They look at you like a blank wall and go on to the next one. It’s not just listening.”

For example, with the recent decision to allow a RaceTrac gas station at the corner of Royal Palm Beach and Southern boulevards, Webster said that the response she heard from those in the community was that they did not know about it. Agendas for council meetings go on the web site the Friday prior to a Thursday meeting, which Webster said is not enough time.

“We have a working-class, busy group of people, and unless they’re clued into something, they’re not looking for it; they’re not checking the agendas,” she said, criticizing the law stipulating that only people within 300 feet of a project need to be notified in writing. “I believe it is your responsibility to pick up a phone and call them, or to say to Mr. Liggins, ‘You know, I think that people need to know about this issue. Let’s send out some letters farther than 300 feet.’ I think that’s taking the initiative and involving them.”

Picking the right projects for the right places, she said, is how the village can help to ease traffic problems.

In addition to RaceTrac, she mentioned Lennar’s project to build 385 single-family homes on the village’s old wastewater treatment plant site. She predicted future traffic problems because the connection is on a two-lane road.

“One of the ways that we can do something about the roads is to look at the projects we’re approving and see where they’re approving them and not go back a year later and say, ‘Oops,’” she said.

She was also critical of the planned Acme Ranches project along the south side of Southern Blvd. just west of SR 7. The project, Webster said, was given too many variances and is too intense.

Webster wants the council to look at the big picture when considering projects. For example, additional traffic lights and possibly street widening are things that should have been discussed regarding RaceTrac, she asserted.

“All we got out of RaceTrac was for them to tear down trees and put another lane in,” she said. “That was the answer, but nothing was ever discussed north of the roundabout, so I don’t think they’ve done their due diligence on making the right decisions on the roadways.”

Webster added that the RaceTrac decision was the trigger that got her to enter the mayoral race. “The reason I’m running for mayor is because of the intensity of the project,” she said.

At the very least, the project should have been smaller, Webster said. The council, she said, did not listen to the people about keeping the project in scale at 12 pumps, rather than 16 pumps.

“The 12 pumps meant it would fit on the lot appropriately,” she said. “I think it was the wrong project in the wrong place.”

If the project was approved at 12 pumps, Webster said she wouldn’t have liked it, but probably would not have run for mayor. “It would not have impacted the community in the way that this one will,” she said.

The closed connection of Madrid Street to the State Road 7 extension needs to be reexamined, Webster said. “I will reexamine that because we have to get traffic out,” she said.

Exiting Commons Park after major events has been a problem. Webster suggests looking at aerial views for possible exits and entrances.

The many parks in Royal Palm Beach, Webster said, are some of the village’s greatest assets. To help keep expenses in check, she would talk to consultants who deal directly with parks.

“It might be worthwhile to get a consultant to look at all of our parks and to examine the usages and costs and what we do, and from a more professional point of view, give us an idea and a long-range plan of how we can use the parks more effectively,” Webster said.

The village has commercial areas that aren’t being maximized, she said, and the village needs to look at marketing those lots to revitalize them.

Regarding the planned State Road 7 extension to Northlake Blvd., Webster wants the village to stand strong and make sure it gets done.

“It’s all legal now. We fought the good fight when it was getting people out. We really succeeded in that. Now, it is in the courts,” she said.

Webster believes that there is a larger responsibility as a mayor to run meetings and be an ambassador for the village. “It’s much more than being a council person,” she said. “I think a lot of Royal Palm Beach, and I definitely see it as the ‘just right’ village.”

While she has run several times before, Webster dismissed the idea that she is a perennial candidate.

“This race is different because I’m running for the right reasons. I’m very passionate about it,” she said. “Last year, I just ran to run. I feel like this is my time.”

Webster said that her strengths are leadership and the ability to reach out to the community and work with people. Being able to recognize what people need and fulfilling their needs, she said, are assets that a mayor must have.

“I’m just very fond of the people that I meet and I talk to,” she said. “I think I’ve got this covered. I think I’ll be very good at it.”

She was critical of her opponent, Pinto. “He’s sat there for 12 years and he has not been engaged,” Webster said. “The way that he sits on the council, he doesn’t seem to have a whole lot of interest in people, either.”

She urged Royal Palm Beach voters to choose her as their next mayor.

“I’m going to represent them, and I’m going to give them back the community that they came here for, invested here for, and that they want,” Webster said. “They can look to their future and know that that’s what they’re going to have.”