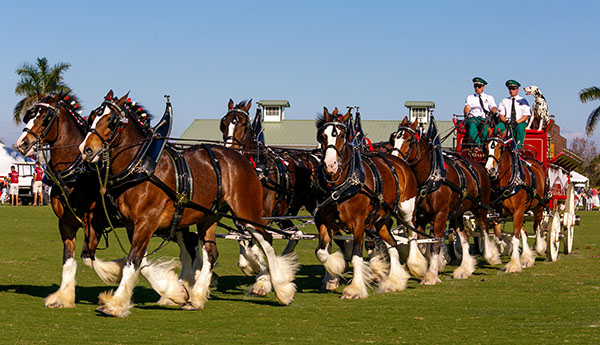 The International Polo Club Palm Beach celebrated the launch of the 26-goal polo season last Sunday with a thrilling match in which Orchard Hill defended their 2015 title by defeating Audi 11-9 to win the C.V. Whitney Cup, presented by Sentient Jet.

Spectators were treated to a halftime champagne divot stomp that included an appearance by the world-famous Budweiser Clydesdales. The eight-horse hitch was harnessed to the iconic Budweiser beer wagon and circled the field twice, stopping for fan photos. The magnificent “gentle giants” were a crowd pleaser, standing six feet tall at the shoulder with a blaze of white on their faces and the signature white feather strands on their lower legs.

Lilly Pulitzer hosted giveaways and promotions at the Pavilion, with fashionable guests wearing their colorful prints in trendsetting style.

The 26-Goal USPA Gold Cup is scheduled on Engel & Völkers Field for the next three Sundays, March 13, March 20 and March 27. Mark your calendar and purchase tickets early.

The International Polo Club Palm Beach is located at 3667 120th Avenue South in Wellington. Polo matches are open to the public, with a wide range of hospitality and guest seating. Tickets start at $30. For ticketing and sponsorship information, call (561) 204-5687 or visit www.internationalpoloclub.com.

ABOVE: The world-famous Budweiser Clydesdales circle the field. PHOTOGRAPHY BY LILA PHOTO