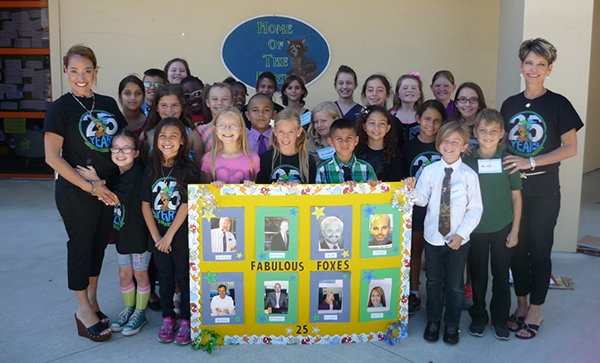 “Celebrating 25 years is really a testament to the community,” Dujon said. “To have all the past administration come back and celebrate with us was an excellent way for us to share our school’s story.”

Dujon’s favorite part of the day was the learning walks, which took place after the morning ceremony, where the students had the opportunity to share their learning with the guests.

Assistant Principal Darline Karbowski got emotional during her ceremony speech.

“I have the unique perspective of seeing the school as a parent, and then as an educator,” said Karbowski, whose son, Thomas, is a fifth grader. “It’s emotional for me because I’ve seen my son grow and benefit from the hard work that’s put into the school from the community. That’s what 25 years means.”

Drama teachers Christie Lavigna and Karen Williams had their students put on a show. The performance featured four scenes, featuring the past and present settings of Acreage Pines Elementary School, highlighting former principals and the current administration.

“We had butterflies in our stomachs getting ready for this event,” Lavigna said. “Being a part of this event today was an honor, and it showcased our years of success here. Our students focused on our new biomedical veterinary choice program. This was the first time the drama students wrote, directed, produced and acted the entire play.”

Dawn Shock chaired the 25th anniversary celebration, which included speeches by several former school principals, including Phil Sorensen (1991-94), who was the school’s inaugural principal, and Al Carnahan (1994-99), the school’s second principal. Former Assistant Principal Betty Reed (2000-15), who taught kindergarten at the school in the 1990s, also gave her reflections on the milestone.