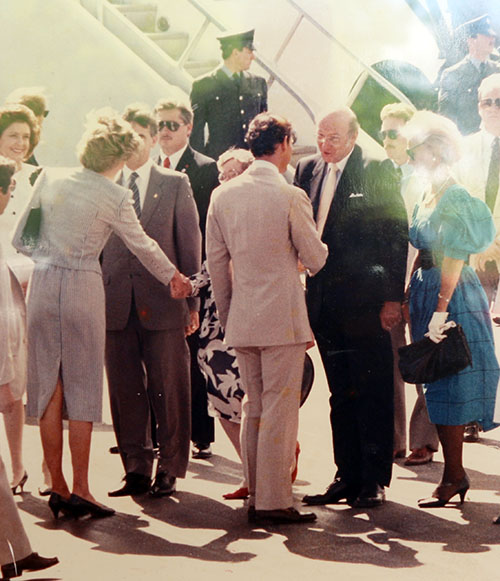 The news that British royal Prince Harry will be stopping by Wellington for a brief polo visit next week has Wellington pioneer and former Palm Beach County Commissioner Ken Adams recalling another such royal visit 31 years ago.

Prince Harry’s parents — Charles, the Prince of Wales, and the late Princess Diana — stopped in Wellington during a whirlwind 21-hour trip, and Adams was there with his wife Arle to greet them on the tarmac, as several county commissioners did, and formed a nice rapport with the regal couple.

“I was chairman of the county commission at that time,” Adams recalled, “and we were very proud of our airport because we had just rebuilt the whole airport. It looked nice, and we felt good about that.”

The royals arrived on Tuesday, Nov. 12, 1985 on a Royal Air Force jet just after noon, attended a polo match in Wellington at 3 p.m., then headed to an event at the Breakers in Palm Beach. The next morning, they left to continue on their U.S. trip.

“It was a huge event in the overall growth of Wellington,” Adams said, noting that it happened just a few short years after Palm Beach Polo founder Bill Ylivakser first brought polo to the fledgling community.

The visit brought the high society members of Palm Beach to Wellington, an area that was still just partially developed, to attend the game. There was even an elevated royal box for Princess Diana to watch Prince Charles play, Adams recalled. Attendees waved to her in the box and took pictures to commemorate the event.

“The club was jammed; the streets were jammed,” Adams said. “It was, by far, the largest thing that had ever happened in this area.”

The royals were easy to talk with and down-to-Earth people, Adams said. He even discussed the burden of leadership with the princess.

“It was an incredible, fun day,” he said. “It was the coming-out of Wellington.”

Kensington Palace, Prince Harry’s official residence, announced the 31-year-old royal’s visit earlier this month. He will be playing on Wednesday, May 4 at the private Valiente Polo Farm, owned by patron Bob Jornayvaz, in an event to benefit Prince Harry’s charity, Sentebale.

The Sentebale Royal Salute Polo Cup 2016 is by invitation only. Sentebale was founded by Prince Harry and Prince Seeiso of Lesotho to help those affected by the HIV/AIDS epidemic in the South African kingdom. Lesotho has the second-highest HIV infection rate in the world. One in three children are orphans, and Sentebale (www.sentebale.org) is working to make a difference in the lives of those overlooked and fighting poverty in Lesotho.

Adams, who played polo in his younger days, is looking forward to Prince Harry having a great game on Valiente’s fields.

“I really hope they have a good, safe game,” Adams said. “It’s a feather in Wellington’s cap — it really is.”

ABOVE: Wellington pioneer Ken Adams, then a county commissioner, greets Prince Charles and Princess Diana on the tarmac in 1985 for a visit that included a polo-playing visit to Wellington.