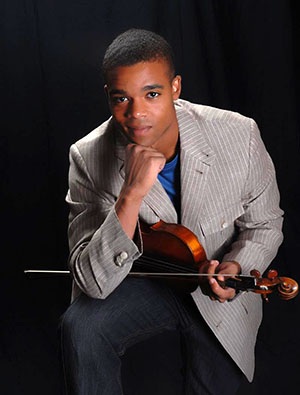 The concert will be held Tuesday, April 19, from 7 to 9 p.m., in the Harriet Himmel Theatre at CityPlace in West Palm Beach.

Dr. Robin Arrigo will accompany Johnson on the piano for an unforgettable night of music performed by two charismatic and energetic musicians.

Gareth Johnson holds a master’s degree from the Lynn Conservatory of Music in Boca Raton and travels the world as a soloist, master teacher and educator. He is a dedicated composer and arranger of contemporary, classical, new age and hip-hop music.

Johnson has won numerous competitions and prizes throughout the United States and Europe playing on an 1840 J.B. Vuillaume violin.

Arrigo received a bachelor’s degree in piano performance and master’s degree in music education from Florida State University. She also has a doctorate of musical arts from the University of Miami.

Arrigo has spent the last three summers studying and concertizing in France, Spain and Italy, and has written two piano transcriptions of newly discovered works by Mendelssohn.

Held on the third Tuesday of every month in the Harriet Himmel Theater at CityPlace, Music for the Mind concerts feature musical groups from Palm Beach County.

Beginning in 2002, Music for the Mind has provided 10,792 young musicians with an opportunity to perform, while generating more than $558,000 to help promote music in the schools and the community.