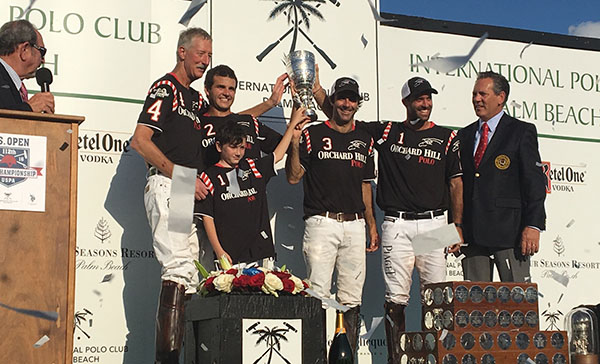 In the 112th U.S. Open Polo Championships final, Orchard Hill defeated Dubai 13-12 in an overtime thriller to capture the coveted championship trophy and cap the 2016 season at the International Polo Club Palm Beach.

Led by 2015 U.S. Open champion Adolfo Cambiaso, the No. 1 ranked player in the world, Dubai also reached the finals undefeated in its first U.S. Open appearance. Between both squads, the field saw three 10-goalers on the field.

Orchard Hill’s Facundo Pieres jumped out of the gate, scoring a mere 18 seconds into the first chukker, as Dubai answered shortly after to tie the game. A penalty shot, along with dart through a sea of horses from Cambiaso would end the first chukker 3-1 in favor of Dubai.

Pieres scored early on in the second from a penalty 3 to keep the game within reach. Dubai’s team owner Rashid Albwardy’s breakaway goal gave Dubai a two-goal lead. A tag-team effort from Juan Martin Nero and Pieres late in the second chukker kept Dubai’s lead to one.

Orchard Hill rode its momentum into the third chukker, taking a three-goal lead off goals from Julian De Lusarreta, Nero and Pieres. Cambiaso scored on a penalty to help keep his team in contention.

The start of the second half saw Dubai slowly creep back to regain the lead, 8-7. Pieres’ penalty shot kept the match tied 8-8 to end the fourth chukker. Costly penalties from both squads allowed Dubai to take a one-goal advantage heading into the sixth and final chukker.

Penalties continued to plague Orchard Hill, as a safety would give Dubai an 11-9 lead. Solo heroics from Pieres tied the match with less than three minutes remaining. Dubai padded its lead by one additional score, as the clock continued to wind down. After winning a challenge, Orchard Hill tied the game on a Pieres penalty with 50 seconds remaining, forcing the game into overtime.

A stellar defensive performance from Orchard Hill narrowly thwarted Dubai’s efforts to capture the title early on in overtime. A series of back-and-forth play led to Pieres scoring on a breakaway goal, ending the match in sudden death.

“Congratulations to Orchard Hill on an amazing victory today,” said Joseph Meyer, chairman of the United States Polo Association. “Both sides played a fantastic match, and gave us all an opportunity to witness some of the greatest polo talents the sport has seen.”

During a pre-game ceremony, the USPA honored equine legend Wembley for his exceptional ability and longevity in high-goal polo. Following the conclusion of the U.S. Open trophy ceremony, the USPA presented the Hartman Best Playing Pony of the Open award to Divas Dos, owned by Orchard Hill and played by Juan Martin Nero, and the Seymour Knox MVP award to Facundo Pieres.

Fans can relive the championship match by tuning in to NBC Sports Network on Saturday, April 30 at 5 p.m. The 90-minute broadcast will feature game action, behind-the-scenes commentary and interviews with celebrities and notable figures from the polo community.