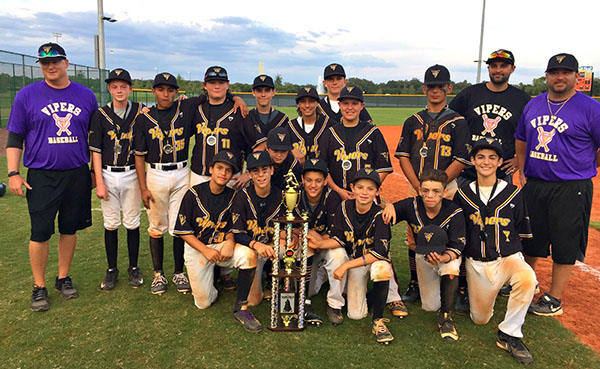 On May 22, the Vipers 13U team, sponsored by Rawlings, finished as runner up at the Nations Baseball Empire Strikes Out tournament held in Sanford.

There were teams throughout Florida participating in the tournament.

“You’ve got to wonder how the outcome of the championship game would be if we didn’t have to play four games on Sunday alone,” coach Louie Siciliano said. “The opposing team had to play two games prior to the championship game, and we had three games. It was a hot weekend, and the boys showed that they have the hearts of a champion.”

Siciliano felt the team’s chances were good after beating the third-place team.

“Maris Prince was hitting the ball and driving runs in, and Tristan Gasset pitched a shutout freezing their offense, not allowing any runs,” he said. “The team scored 42 runs total that day in the tournament.”