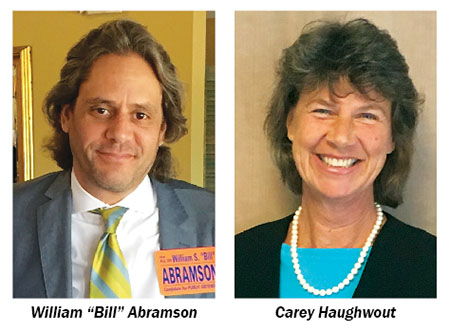 On Tuesday, Aug. 30, incumbent Palm Beach County Public Defender Carey Haughwout faces a challenge from attorney William “Bill” Abramson. Haughwout has held the countywide office for nearly 16 years. Along with her staff, she makes sure that criminal defendants have proper representation.

Both Haughwout and Abramson are Democrats, but since no one else filed to run for the position, the Aug. 30 vote will be a universal primary contest open to all voters.

Abramson moved to Florida from New York when he was 15 years old and attended Spanish River High School as a member of its first graduating class. He worked for the state attorney’s office from 1993 to 1994, before opening his own private law practice in 1995.

“My practice has been such that I get a lot of referrals from other lawyers, police officers — troopers, deputies,” Abramson said. “My former clients routinely refer me to their friends because I do a great job for people. That, to me, is the highest form of praise when your clients are satisfied and the people that you deal with on a daily basis, people that you go up against, other lawyers, law enforcement officers, people in the state attorney’s office, people in the public defender’s office, have referred me cases because they know I do a very good job for people. I am very good about what I do, and I always put my client first.”

Abramson has had a colorful legal career, including several run-ins with the law. He narrowly won a circuit court seat in 2008 but was blocked from serving by the Florida Supreme Court.

Abramson initially thought that Haughwout was not going to run for another term and decided to run for the position. “I do truly believe in my heart that I will do a better job,” he said. “The office lacks organization. The office lacks training, and morale is very low.”

He wants to make the office more transparent and help with morale, he said.

Abramson believes that his administrative changes will lead to a better public defender’s office, providing support for new lawyers. “They’re going to be doing the trials. I’m going to be there in the trenches, giving them advice and helping them,” he said.

Abramson wants to organize the training program, hire lawyers with a diverse background, keep lawyers in the office for an extended period of time and reorganize the office. He said he will be there for his attorneys. He wants to be someone his attorneys will come to for legal questions while increasing the camaraderie and creating a better work environment.

“I’ve been very fortunate in my life. I’ve had a lot of advantages, and I want to give something back to people who don’t have any,” he said. “I want to do something for other people.”

Haughwout has been practicing law for 33 years and is a board-certified criminal trial lawyer, qualified to handle death penalty cases.

“I have been representing people, protecting their rights and liberties for 33 years. That’s what I’ve always done, and that’s what I do as public defender,” Haughwout said.

She also has a degree in economics, which she said is useful in running a large law office with 200 employees. “I think that helps me in how I fiscally manage the office,” she said.

Haughwout won election in 2000 and has been the county’s public defender since 2001.

“I think we run a great office, and I want to continue,” she said. “I’m very committed to this work. I also think there are some special challenges facing the criminal justice system with regard to what we’re seeing day-to-day in terms of confidence in the justice system on the streets and in the courts. I think it’s important that we maintain the quality representation for people who are represented by the public defender’s office.”

Haughwout spends time in the courtroom, and also manages, trains and mentors new lawyers, in addition to collaborating with other community leaders on issues that affect criminal justice policy. She wants to see more diversion programs, working to keep people out of the criminal justice system.

Haughwout sees many services that the clients need, and believes that if certain services were in place, some individuals wouldn’t be in the criminal justice system. Such services include substance abuse and mental health treatment, and support for the homeless.

“I want to continue coordinating services for our clients. We have expanded our social services division and just started a diversion program for people who are driving with suspended licenses. I think that is going to be very successful. I want to see that to completion,” Haughwout said.

There are new laws regarding juveniles sentenced to life in prison, and Haughwout is working on a new program to help them, since they are now entitled to new sentencing hearings.

“These are cases that are 20, 30 years old and require very detailed mitigation work and background investigation,” she said. “Those are some of the challenges facing us now that I am eager to take on.”

Haughwout is asking voters to re-elect her.

“My experience, my reputation for professionalism and excellence, and what we’re doing in the office — excellent training and mentoring, fiscally responsible use of taxpayer dollars and vigorous advocacy for our clients,” she said. “I think those are all reasons why I’m the better person for this job.”