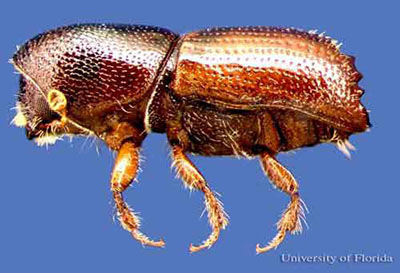 Pine trees in Wellington are having a problem. They’re stressed, and Ips engraver beetles and black turpentine beetles are taking advantage of that stress, killing trees that aren’t perfectly healthy.

These small bugs, less than 8 millimeters long, or about the size of a grain of rice, are effective killing machines, Wellington Landscape/ Forestry Operations Supervisor Brian Hopper said. It takes just a matter of days for the trees to be overcome.

This isn’t the first time that the pests have waged war on stressed Wellington pines.

“It kind of goes in peaks and valleys,” Hopper said. “They go through population increases when the trees are stressed out.”

The high heat this summer, or poor site conditions such as disturbances to soil, fertilizer or irrigation, could be the culprit. “Pines prefer a more natural setting,” Hopper said.

Typically, three types of Ips engraver beetles attack pine trees. One type attacks the lower canopy of the tree, another the mid-canopy and the third attacks the upper canopy of a tree.

The beetles work under the bark causing their damage, making it impossible to know that a tree is under attack until it is almost too late.

All at once, Hopper said, the pine needles will turn brown and shed.

“It’s not like it’s a few needles coming off. It’s like the whole tree turns brown,” Hopper said. “By that time, unfortunately, it can be too late to save it.”

This tree transformation can take a matter of days. However, if the infestation is caught early, the tree might have a chance.

The cost of spraying the entire tree with a treatment such as Bifenthrin XTS by a Florida licensed pest control company is less than the cost of removing a tree, he noted.

“I would give it a shot,” Hopper said. “If it is already completely browned out, and the needles all dropped, it’s pointless.”

The beetles attacking Wellington’s pines typically do not move from tree to tree. However, there are other types of beetles that do.

The Village of Wellington suggests avoiding damage to the root zones of pines, making sure to plant new pines with 15 to 20 feet between them, minimizing competing vegetation beneath pines, maintaining proper nutrient and acidity status near the root area of the pines and providing supplemental watering if there is a period of extended drought.

Mark Torok, state forester for Palm Beach County, noted that the beetles in question are not an exotic species. They’re native to Florida.

Though there are non-native beetles that attack trees, the beetles attacking the trees in Wellington, Torok said, generally attack only stressed trees.

Trees can be stressed in many different ways. For example, Torok said, after Hurricane Wilma, trees were stressed from the strong winds.

Many of the dying trees seem to be in areas with urban change, such as where new homes are being built, irrigation is being installed, extra non-native soil is added to an area and other things are changed around a tree’s root system.

Pine trees do well in natural areas, Torok explained, with minimal disturbances. If beetles attack natural areas, it is usually because of lightning strikes stressing the trees.

“The South Florida slash pine is not a very good urban tree. They don’t like a lot of disturbance, so when we do disturb them, they get stressed out,” Torok said. “This is what happens. These beetles like to attack.”

For example, a tree with a 10-inch diameter trunk is not as likely to survive an attack by 15 black turpentine beetles as a tree that is 20 inches in diameter.

The combination of the two beetles attacking Wellington complicates the issue.

The entire tree, he explained, has to be sprayed to protect the tree from beetles. Spraying only one part leaves the rest of the tree vulnerable.

Using pine needles or mulch around a pine is better than grass, Torok explained, because whatever the grass is being treated with will reach the roots of the pine.

“The less amount of activity around those trees, the less problems you’ll have,” Torok said. “The cure really is prevention. Eliminating certain stress factors is best.”

ABOVE: The Ips engraver beetle.