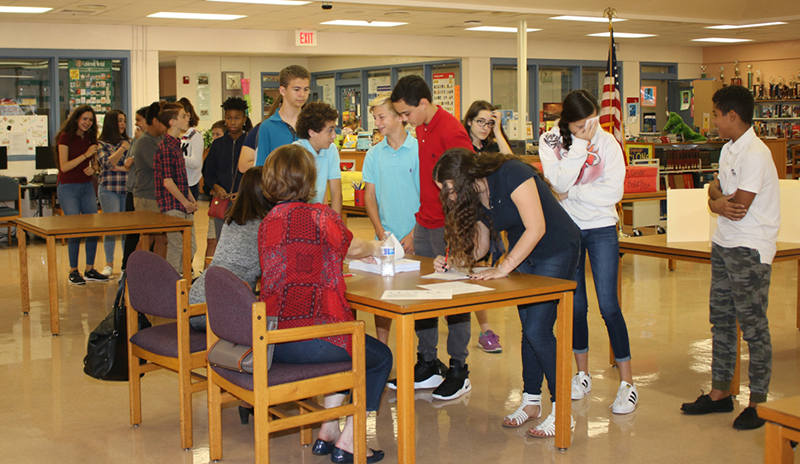 More than 1,000 students at Wellington Landings Middle School took part in a mock election on Wednesday, Nov. 2 in the school media center.

“The school conducts a mock election every two years,” she said. “Every grade takes part and does different activities that involve researching the candidates and the issues.”

Seventh-grade students learn civics, and thus had a special project with a deeper analysis. They had to complete assignments focusing on where candidates stand on issues.

Activities included: complete a map project about the Electoral College, defend which candidate is best suited to be president, take political quizzes and find their best candidate match, watch a debate and rate the candidates, write a letter to the next president, create an analysis chart based on television commercials and create a political cartoon.

“The election project was created by our seventh-grade team,” Flowers said.

Throughout the day, different classes came into the media center to cast their ballots.

“Student Government was responsible for making announcements for two weeks prior to this election,” Flowers said. “They also made announcements that taught the students about who was running for president, vice president and senator. In addition, students got to vote for an eighth-grade party theme and Spirit Week.”

Through this series of exercises, Wellington Landings students learned about the voting process and the impact it will have on them through research and experience, Flowers said.