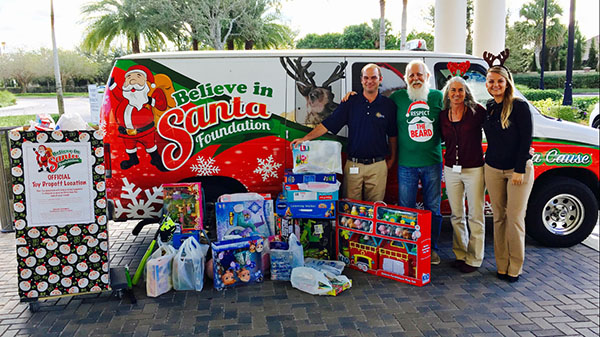 NuVista Living at Wellington Green has held a toy drive for five years as part of its community outreach, and this year was no different. NuVista tries to get its message to others though its actions and lead through example. With another facility in Lutz, Fla., and a state-of-the-art facility almost ready to open in Jupiter, the company’s goal is to make NuVista’s mark as a leader in the healthcare field through positive contributions both in and out of the facilities.

NuVista also participates in runs, walks and in-house fundraisers for many causes. In October, many individuals ran a fundraiser to collect money for Breast Cancer Awareness Month. It was the second year in a row that NuVista was able to send a donation to the Susan G. Komen Foundation.

ABOVE: Michael Holmes, Keith Carson of the Believe in Santa Foundation, Pamela Collins and Ashley Tonneson with the collected toys.