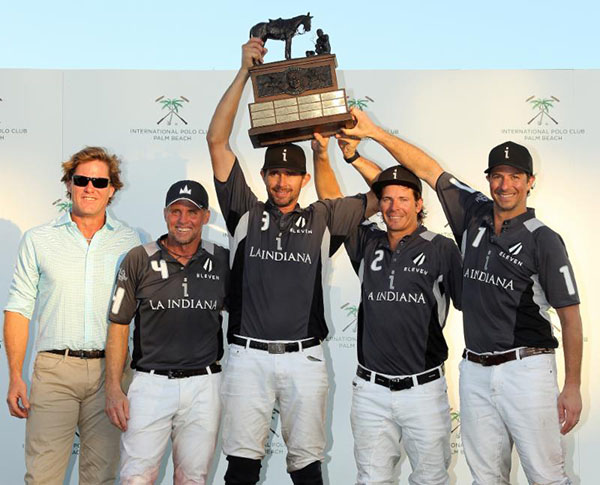 In what was projected to be an evenly matched final, La Indiana came out gunning and dominated Mt. Brilliant throughout the first half.

Mt. Brilliant opened the scoring with a penalty 2 goal converted by Jason Crowder, but after that, the team’s scoring chances were few and far between. La Indiana controlled opening play with a fast-paced style, passing forward to open players. The team proved itself the quintessential four-man team, with each player contributing one of the team’s first four goals.

Patron Michael Bickford led off the scoring, followed by goals by Mike Azzaro, Jeff Hall and Gringo Colombres. This started a run of seven consecutive goals for La Indiana, which led 7-2 after two chukkers.

Trailing by five, Mt. Brilliant needed a strong third chukker, but ran into an unstoppable machine. La Indiana scored four straight goals — yet again, one by each player. La Indiana’s synchronistic teamwork made it next to impossible for Mt. Brilliant to stop every player on the attack. This resulted in La Indiana taking an 11-2 lead into halftime behind 10-of-14 shooting from the field. Mt. Brilliant managed to shoot at goal just three times in the entire first half.

La Indiana played a strong team defense going into the second half, with Colombres applying constant pressure on Santiago Chavanne, the leading field goal scorer in the tournament. La Indiana did not allow Chavanne to score even once on the day. La Indiana maintained its lead through the fourth and fifth chukkers, taking a 13-6 advantage going into the final chukker.

Mt. Brilliant made a late push, with tournament high-scorer Jason Crowder scoring four of his game-leading eight goals in the final chukker. That brought his team within three goals of La Indiana for the first time since the start of the second chukker, but the deficit was too large to overcome. Mt. Brilliant ran out of time, and La Indiana held on for a 13-10 victory and the 2017 Joe Barry Memorial Cup trophy.

The next tournament in the 20-goal season, the Ylvisaker Cup, will be featured this weekend at IPC. All games in the Ylvisaker Cup will be live streamed on the USPA Polo Network at www.uspolo.org.

The 2017 polo season runs from Jan. 1 through April 23 with a wide array of social options available each Sunday afternoon. For more info., visit www.internationalpoloclub.com.