In attendance to pay homage at the unveiling was Sanford’s widow, Susan Sanford, and son Chad, along with Broncos baseball players dating back to the school’s inaugural 2004 season. Parents and fans filled the bleachers for the daylong event.

Before Sanford lost a yearlong battle to cancer at the age of 66, he spent a lifetime dedicated to the game, working in Major League Baseball as the Miami Marlins iconic announcer for 15 years. His voice became the staple not just at Marlins games, but at the Bronco games as well. His résumé also included general manager of the West Palm Beach Expos, assistant sports director at WPTV-Channel 5, the voice on WJNO sports and induction into the Palm Beach County Sports Hall of Fame. Sanford also had the opportunity to announce the baseball games at the 1996 Olympics in Atlanta.

Sanford was a longtime resident of Wellington and had a special connection with the Bronco program. He began announcing on occasion for the Bronco baseball program and later became the voice of the team’s home games.

“I used to fill in when he would have Marlins games,” said Lauren Thompson, the new team announcer. “Now it’s my job full-time.”

Thompson recalled learning a lot from her mentor, knowing she has big shoes to fill. “When he would come back from Marlins games, I would be so ready to hand over the mic to him, and he would say, ‘You are doing great, keep going.’”

Thompson is on the faculty at Palm Beach Central and has been a longtime supporter of the baseball program.

“We play 100 innings, and we will continue to do this year-to-year,” Gullo said. “Players go out and get sponsorship, and we invite alumni and friends out to play.”

Benedict was the head coach during the Broncos’ first season, and Gullo was the assistant then. The two helped the Broncos to a No. 2 national ranking in just a short time. Gullo took a break from coaching high school baseball to direct his attention to his then-young family. Gullo returns to run the Bronco program.

Gullo expressed his appreciation of Sanford’s contributions over the years. “This is super special,” Gullo said. “We have to thank Mr. Edgecomb for allowing us to do this, and it’s huge for the players.”

Sanford’s voice became synonymous with Palm Beach Central baseball, and the players have grown up hearing his commentary.

Both the varsity and junior varsity participated in playing against alumni players. The range of alumni players spanned from some currently playing at the collegiate level to older former players who have moved on to life after baseball.

Alumni player Andrew Anagnostu, a 2006 graduate, came out to play in the game. Anagnostu played college baseball at Palm Beach State. “When I walked through that gate, and saw coach Gullo, the first thing I said was, ‘I’m home,’” Anagnostu said. “A lot of us have kept in touch, and always thought about, ‘Let’s come out and get some batting practice.’”

Anagnostu had some wise words for the current Bronco players. “I said don’t take one day, one minute of this for granted,” he said. “One day you’ll miss it a lot.”

Anagnostu credits playing the game for his developing character and friendships after high school that have carried over to being successful in life. He still wears the same game ball cap from his glory days. “I wouldn’t be where I am today if it wasn’t for this; I’m married, and have a kid on the way,” he said.

Gullo already plans to make this an annual event, and if the numbers in attendance are any indication, this game/fundraiser is sure to continue to be a success for the Bronco baseball program. Parents, players and fans will most certainly remember the voice and contributions to the game of Dick Sanford. 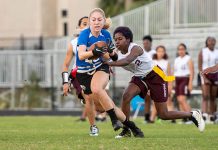