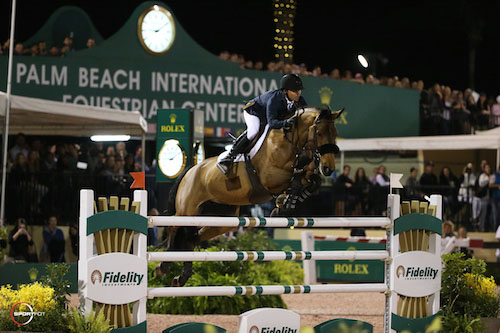 Course designer Robert Ellis saw 40 competitors jump his first-round track for the five-star event under the lights. Eleven advanced to the jump-off, where three jumped double clear in the race against the clock.

Farrington and Gazelle emerged victorious with a time of 44.48 seconds. De Azevedo finished second with Comic in 45.69 seconds, and Tyree guided Bokai through the timers in 48.29 seconds.

Farrington, who is currently the No. 2 ranked rider in the world, put in a thrilling jump-off round with Gazelle to ensure victory. He jumped the 11-year-old Belgian Warmblood mare to a team bronze medal in the 2015 Pan American Games in Toronto, among other top international finishes.

“My plan in a jump-off is usually to play to the horse’s strengths unless there are only three in it, then maybe you have a different strategy,” Farrington said. “Coming after me are Fine Lady and Eric Lamaze, and they are an incredibly competitive combination. They are super fast against the clock, so my plan was to do what I thought the limit was for my horse and put the pressure on him to have to really chase me to win. I knew if we were both running, his horse is probably faster in this type of arena, so I tried to put the pressure on him and hope he would have one down. Luckily for me, it worked out tonight.”

De Azevedo was aboard his 10-year-old Dutch Warmblood stallion Comic for Saturday’s top finish as he geared up for week eight’s CSIO Nations’ Cup competition.

“I am very happy because for me, it is like a win to be second behind Kent Farrington,” he said. “I am really happy with my horse. We bought him when he was just a six-year-old, and we built him. My goal was to be here where we are now, so I have to just thank God for that.”

Tyree began the 2017 season with a third-place finish in week one’s $75,000 Rosenbaum Mollengarden PLLC Grand Prix aboard Bokai, an 11-year-old Dutch Warmblood gelding that she began riding in July. On Saturday, Tyree earned her highest five-star finish and also received the award for Leading Lady Rider for the second time this winter, presented by Martha Jolicoeur of Douglas Elliman in memory of Dale Lawler.

“This was my first five star with him,” Tyree said. “It is a relatively new partnership, and I really just tried to go in and have a smooth jump-off. I’m a little bit new to going quick at this height. I knew I had Kent and Eric after me, and chances were they were going to be a little bit quicker, so I thought I would go for a smooth, clear round, and he jumped fantastic.”