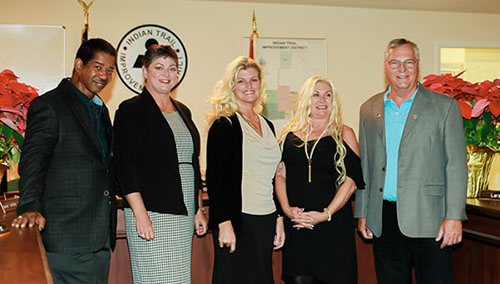 At the Jan. 24 meeting, ITID consulting attorney Marty Perry reported on the status of the GL Homes and Iota Carol projects.

“The reason we were here on Jan. 11 and the reason we’re here tonight was there was an urgency with it. That urgency no longer exists,” Perry said. “My suggestion is that you have a great deal of information that has been provided you. You have two letters, one from each of these developers. You have a significant amount of reports relative to those proposals. It’s a lot of information to digest.”

Perry recommended that the supervisors take advantage of the additional time that they now have to further digest the information and ask consultants questions individually if they have them, and schedule another meeting to come up with recommendations to the county on the developments.

“You will be much better prepared to go forward and make a decision relative to what recommendations of conditions you may have relative to either or both of these projects,” he said.

Supervisor Carol Jacobs said many of the roads in the district are in bad shape now, adding she would not vote for either of the developments until existing roads are fixed and aligned to specifications.

“We need to take care of our own neighborhood,” Jacobs said. “Our roads are a mess, and if they want to get any kind of OK from me, they ought to put some money up front now to help us straighten these roads up.”

Supervisor Betty Argue noted that she has opposed applications for more intensive development for the past three years.

“GL Homes has already got their approval, and that is going to have an enormous impact on the western part of The Acreage, and the eastern part, too, for that matter,” Argue said. “I strongly believe that we need to see what things we can do to help mitigate the traffic and the impact on our area. The area that is the Iota Carol property and GL Homes is the rural tier that was protected under the comprehensive plan. Our Board of County Commissioners have repeatedly, every time a big developer comes along, amended our comprehensive plan, gutting the protections that were put in place to protect our area and protect our lifestyle.”

Argue said that she appreciated e-mails and calls from residents opposed to the projects, but pointed out that the final decisions are by the county commissioners, not the ITID supervisors.

“We have absolutely no control over the decisions of whether a development is going to happen or not,” she said. “Ultimately, what ends up being our responsibility are the active units on our map and how the development going on around us is going to impact that.”

Argue agreed with Jacobs that there are roads in The Acreage that need work now, and added that there are other large plots of agricultural land that could still apply for increased density in the future.

“If we don’t start saying ‘no’ now, the rest of that agriculture is going to be gone, and we need agriculture,” she said. “There’s not going to be much of that land left in Palm Beach County because it will be built on.”

Argue made a motion to send a letter to the Palm Beach County Commission to request denial of the land use change for Iota Carol.

Ken Tuma, representing Iota Carol, said that the public benefits of the project are significant.

“We are committing to dedicate that 400 acres of land for stormwater management,” Tuma said, adding that the developer is committed to dedicating 20 percent or 30 percent of its stormwater drainage allocation to ITID.

He said the developer has submitted a letter to the county agreeing not to annex the property into another entity such as the City of Westlake, has committed 10 percent of the development for workforce housing, and agreed to donate $1.5 million to ITID over and above its proportional share contribution to the county.

Supervisor Gary Dunkley said he agreed with other supervisors that a line must be drawn.

“We’re not blaming you, but the county has failed us by not doing their due diligence in making these approvals,” Dunkley said. “Numbers don’t lie; our roads cannot take the traffic. I don’t want to be unfair; we can’t stop development. We can stop stupid development, but we would like smart development.”

He also agreed that ITID roads are in bad shape and added that he would continue to work with developers to come up with solutions. “Our roads are deplorable, so we have to get our house in order, and I’m pretty sure we’ll come up with something that will work for both of us, but at this point I agree with the rest of the board,” Dunkley said.