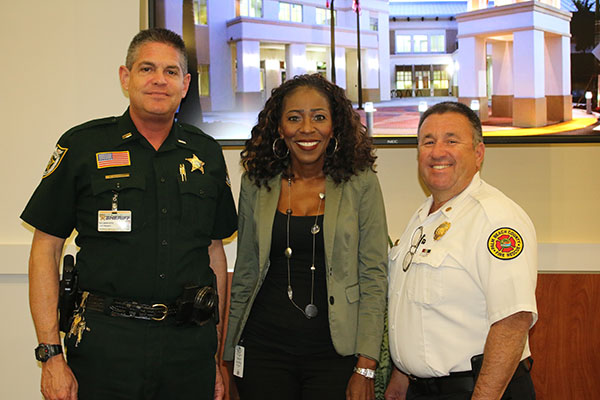 “Wellington is a safe place, but there’s always room for improvement” was the general tone as Wellington’s Public Safety Committee met Wednesday, March 22.

Neighborhood Watch Captain John Schwiner, of Greenview Shores 1, provided a background on the value of neighborhood watch groups and CrimeStoppers. He explained the importance of the programs, and the advantages of letting the community know to report what they see, but not get involved in anything that seems suspicious. Residents who observe something should call the PBSO’s non-emergency number, (561) 688-3400.

Palm Beach County Fire-Rescue District Chief Michael Arena said that there has been a slight increase in response times year over year.

“We’re monitoring that closely,” he said.

However, the increase does not always follow when broken down on a month-to-month basis.

“It was the same, even though the call load increased a little bit,” he said.

“Even though we’ve seen a noticeable trend in increase in calls, it’s not like that every month,” he said.

“We’re constantly looking at ways to improve it,” Arena said of the average response times.

The times Arena mentioned include the dispatch handling time, the time it takes for the firefighters to get the call and get the truck moving, and the travel time to the destination.

As the population density increased, Arena explained, it does take longer to get through the roads.

Committee Member Matt Kurit asked Arena if there was anything the committee could do, or suggest as a recommendation to the council, to help Palm Beach County Fire-Rescue.

“One of the things that can always help is getting the word out to the people when they hear the sirens, whether it is for us or the Palm Beach County Sheriff’s Office, to get out of the way. It seems, in this age of distracted driving, the public sometimes, they’re just not paying attention,” Arena said.

Lt. Eli Shaivitz of the Palm Beach County Sheriff’s Office District 8 substation in Wellington reported that from October 2015 to September 2016, last year’s fiscal year, crimes against persons were up from 461 to 471 and crimes against property were down from 1,724 to 1,422.

Vehicle burglaries and residential burglaries, he explained, are cyclical. Though the numbers may be up this year, they were down last year.

During season, he said, there is a larger population, and therefore more crashes.

“Generally speaking, if you average it out, we have about 100 crashes a month in the village,” Shaivitz said.

During the year, the PBSO participates in programs such as Shop with a Cop, food drives, toy drives, bike to school day, backpack giveaways and other events.

When Kurit asked if there was anything that the committee could do to help, Shaivitz said that the Wellington Village Council, along with management and staff, have been good to the PBSO in making sure that the local substation has all the tools it needs.