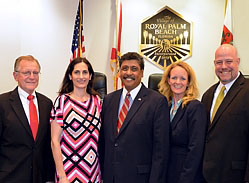 A bill that would regulate cell phone towers holding new technology is making its way through the Florida Legislature, and Royal Palm Beach officials are not happy with its ramifications.

According to Royal Palm Beach Councilwoman Selena Smith, the bill would allow the installation of small cell towers using the latest 5G technology on public rights of way, including in local municipalities.

Royal Palm Beach recently imposed a moratorium on construction of such devices in public rights of way, and local government representatives are trying to negotiate a settlement that would give municipalities some control over their installation.

Florida Senate Bill 596 and its companion Florida House Bill 687 are currently making their way through committees.

“I happened to be by Rep. Lori Berman’s office, and she asked us that if we were against it, to let our representatives know,” Smith reported at the March 16 meeting of the Royal Palm Beach Village Council. “Her letter was, ‘I support technological advances and want to see Florida be an early adopter of 5G technology, but I also believe that our cities and counties need to have some input on placement and cost of small cell tower devices.’”

Smith said Berman voted against the legislation in her first committee meeting, but she wanted the state and municipalities to work together so they can be in agreement. “It’s nice to know that they are fighting for us up in Tallahassee to make sure that municipalities can decide what happens in our community, versus having Tallahassee do that,” Smith said.

Mayor Fred Pinto said he wanted to stay out in front of the approval process. Village Attorney Jennifer Ashton added that a village moratorium is in place, but if the legislature passes the bill, the moratorium will no longer be in effect.

“That’s why it’s so important,” Ashton said. “Councilwoman Smith contacted me and asked, ‘Is this important for us to start calling legislators?’ The answer is, ‘Yes, absolutely.’”

Pinto asked whether the village has been in contact with its lobbyist in Tallahassee, and Village Manager Ray Liggins said he has been. Pinto said he would like weekly updates until the issue is resolved.

“This is a concern of many, many cities,” Pinto said. “We have to do what we can to [control] this. It takes [away] home rule decision-making, and it’s a constant battle.”

“The more I read, the more concerned I get,” Hmara said. “I like the fact that we’re all concerned, because it’s really important. There are a number of bills that we’re talking about.”

Hmara said the Florida League of Cities legislative action team sends out alerts that it considers important, providing a description of the nature of the bill, the reason to be concerned and, most importantly, a list of the representatives who should be contacted, usually members of the relevant committees. He said if they all send e-mails, it can have an impact.

“That works against home rule, which is the basic fundamental idea that the people closest to where that policy is going to be effected are the best judge of what that policy ought to be,” he said, adding that HB 17 has been referred to as “carpet bombing” the notion of home rule.

“It attacks things like our ability to regulate noise, medical marijuana siting and security regulations, adult entertainment, height restrictions, municipal charters, parking of semi-trailers and tow trucks, commercial devices in residential areas, and home-based business regulations such as traffic and parking,” Hmara said. “If we release that authority to a higher level, and we get a one-size-fits-all, then it won’t fit us.”