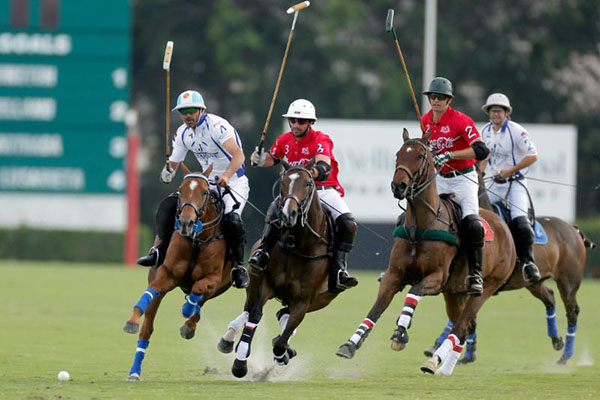 Coming in from last week’s overtime loss to Orchard Hill, Coca-Cola was in for a tough test last Sunday against Valiente on Engel & Völkers field at the International Polo Club Palm Beach. Making their debut in the 26-goal C.V. Whitney Cup, Valiente stole the day 12-3.

Valiente scored early, with Cavanagh converting a penalty attempt to put his team up 1-0. Cavanagh was the designated penalty-taker throughout the game, a plan that worked for Valiente.

While superstar Cambiaso has long been the presumptive penalty shooter, the choice of Cavanagh was not surprising, given the records of the two players this season. In the Ylvisaker Cup, Cambiaso struggled from the penalty line shooting 9 for 19 for Valiente 1, while Cavanagh, playing for Valiente 2, was 13 for 19.

As the two players came together for the 26-goal season, Valiente chose to go with the percentages and had Cavanagh take penalty shots throughout the game. Valiente’s strategy was to allow Cambiaso to manage play from the back, with Cavanagh working hard to block any Coca-Cola defender who tried to pressure the ball. That was very effective, and the extra time for Cambiaso gave him the ability to work in open space and find Zavaleta releasing down field. The setup allowed Zavaleta to shoot at goal three times in the opening half, converting twice for goals.

Meanwhile, Cambiaso and Cavanagh only shot at goal once each, displaying their ability to impact the game with ball control and passing, rather than making attacking runs themselves.

Valiente was relentless, stretching its lead to 7-1 after the first half with Cavanagh shooting 4 of 6 from the penalty line, Zavaleta adding two goals from the field and Cambiaso adding one goal from the field on his only shot attempt. Coca-Cola struggled to keep consistent possession, only putting six shots at goal, with Julian de Lusarreta the only Coca-Cola player to score a goal.

Throughout the game, Coca-Cola tried desperately to pressure Cambiaso when he had the ball, often bringing de Lusarreta and Julio Arellano forward. But that allowed Cambiaso to pass into space and enabled Jornayvaz to block downfield for Zavaleta and Cavanagh as they received the pass. That put pressure on Miguel Novillo Astrada to stay back and never allowed him to push forward in the game. Astrada only managed one shot and no goals for the game as the Valiente offense kept the 9-goaler in check.

With Coca-Cola often on the defense, the team ended up committing 14 fouls to Valiente’s 8 on the game. The team in red never could make a consistent attack from the field or from Arellano at the penalty line.

The C.V. Whitney Cup final is featured this weekend at IPC.

The polo season runs through April 23 with a wide array of social options available each Sunday afternoon. For more info., visit www.internationalpoloclub.com.

Injured Veteran Liam Dwyer Gets Keys To His New Home

Next Town-Crier print edition out August 28.