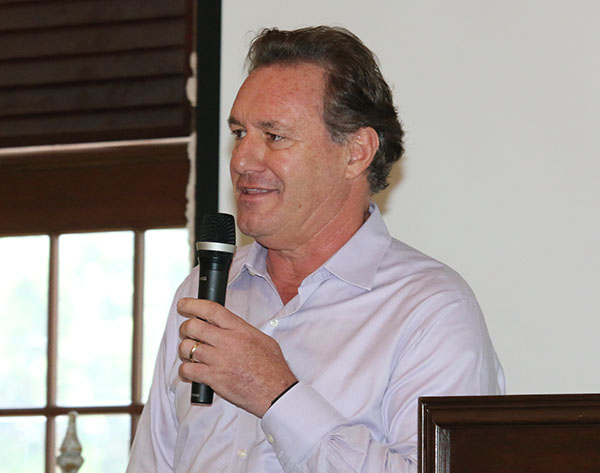 Bellissimo is also managing partner of Wellington Equestrian Partners and CEO of Equestrian Sport Productions, the company that produces the Winter Equestrian Festival.

At the luncheon, Bellissimo focused on innovation and his plans for the future. Bellissimo and his partners are looking to expand the equestrian season in Wellington; provide a location for festivals, tournaments and sporting events; and make Wellington more of a destination location.

“Ten years ago, when I came here, Wellington was in a very different place,” he said, noting that WEF was much smaller, there wasn’t a dressage festival with a dedicated venue and polo wasn’t where it is today.

As someone who wasn’t a longtime equestrian, Bellissimo said, he challenged the convention by asking questions.

“It was a large horse show,” he said. “It was not that impactful. There were farms that existed here, but it wasn’t there.”

In 2004, he and his family moved to Wellington. His partnership later purchased what is now the Palm Beach International Equestrian Center and was able to turn it from a members-only atmosphere to something that was accessible to not only riders of all levels, but also to non-equestrians.

“Ninety-four percent of bed nights leave this community every evening. What this means is, they’re shopping, going to the dry cleaners, going to restaurants… outside of this business area,” Bellissimo said. “We have this industry here. Why aren’t we getting this group to be here to try to capture as much of this revenue as possible?”

People spend as much as 45 minutes traveling to the horse show, which is inconvenient. Bellissimo said his goal is creating products to attract sponsors and new customers, and making things better for residents and visitors.

His team wasn’t able to continue its expansion in Wellington and shifted its efforts four years ago to Tryon, N.C., where they invested $150 million in 16 months.

“Tryon, North Carolina, is now the finest equestrian facility in the world, bar none,” Bellissimo said. “It’s not the biggest, but it’s the best.”

The story of Tryon, he explained, is to show that the economic engine in Tryon will be bigger in a few years than it is here.

This year, he said, was the first year there was a decline in entries at WEF. The decline was about 7 percent and can be attributed to many factors. However, the entry-level people aren’t coming to Wellington like they have in the past, he said.

In Ocala, he said, there is a group getting ready to build something like Tryon.

“It won’t make Wellington disappear. Wellington is always going to be here. I will always fight for there to be a great winter market in Wellington,” he said.

Bellissimo and his team are looking to create hotels and projects on commercially zoned land that will attract products and people. Conferences, shows, sporting events and more could happen in Wellington like they are in Tryon, he explained. But hotels are necessary.

As long as IPC has been in existence, he said, it has lost money.

“The reason I bought the International Polo Club with my partners was not to develop it, it was to keep polo alive. A business that you have to spend $74 million to buy, that’s losing anywhere from $2 to $4 million a year, is not a viable business,” Bellissimo said.

When his partnership first purchased PBIEC, Bellissimo said, it was a venture that was losing money. With time and effort, they were able to turn it around. They’d like to do something similar at IPC, a club that has historically been in the red.

Though there has been some pushback, Bellissimo explained that he and his team are working to create a vision to better Wellington.

Bellissimo addressed his team’s recent plans that were presented to the Village of Wellington that include changes to the International Polo Club property. Changes include adding dressage, a hotel and residential living to the club.

Regardless of what happens, Bellissimo said, he will work to better Wellington. However, if the team’s plans can’t work here, the money will be spent elsewhere.

There will be three meetings in June, he said, that will define what happens in the community.

“Our opportunity in Wellington is unbelievable,” he said. “At the end of this day, at this moment in June, we’ll find out if this is going to be a growth environment or a contraction, save-what-you-can environment.”

Whether or not the current plans go through, Bellissimo and his team will still work toward the best version of Wellington.