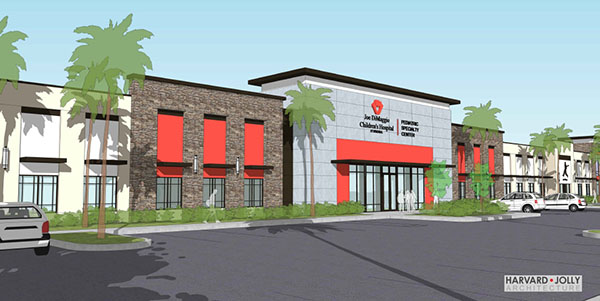 Wellington’s Architectural Review Board approved a request for elevations and signage Wednesday, May 17 for the planned Joe DiMaggio Children’s Hospital at Memorial Pediatric Specialty Center on State Road 7.

The facility will be a satellite location for the main Joe DiMaggio Children’s Hospital in Hollywood, Fla. It will be the sole tenant of the Wellington Parc Commercial Center property, located at 3315 State Road 7. It is on the west side of the street just south of Palomino Drive.

Alan Benenson, president of Wellington Office Parc LLC, was at the meeting to request design approval for the new 31,000-square-foot facility. The main requests regarded an update to signage and appearance of the building as a whole.

The proposed building will have neutral colors and ashlar stone. This brings in elements of the adjacent residential townhome portion of the Wellington Parc project.

The building will also have bright red trimming — “red tomato,” as described in the exhibit designs. Key features of the building include the logo for Joe DiMaggio Children’s Hospital and a silhouette of the man himself along with his name.

ARB Board Member Ron Shamash was concerned with the elevations in regard to children who visit the facility. The rear portion of the building, which faces the residential area, is proposed to have the baseball player silhouettes, but under village code, signage is not allowed when facing a residential development.

“It’s a children’s hospital. There is no entrance in the back, but there is parking in the back,” Shamash said. “The kids will be coming in, and they will be seeing it. I don’t think that the ball players that are marked in black are going to be black; it’s going to be metallic, so it’s not that intrusive. I definitely don’t have a problem with it, and I would like the kids to see that.”

Staff Liaison Kelly Ferraiolo explained that this aspect of the proposal wasn’t an issue for being intrusive, but it was simply a code ordinance in the village. The code is different for a building with multiple tenants that have multiple front entrances.

“For this, we have to pick a primary elevation, which is the east,” she said.

There are two more entrances on the sides of the building that face north and south, so the rear is facing west toward the residential homes, and under the code, cannot have signage. In order to have authorization to allow for technical signage on the rear façade, a zoning text amendment may have to be passed.

Benenson proposed that the silhouettes be considered architectural features rather than a sign. The board agreed that if the name that is normally with the logo was removed, it may not be considered signage on the rear façade and considered more of a “decorative piece.” Verification will still be needed.

A sculpture is to be commissioned for the front entrance once the project is well underway. This would be similar to the sculpture at the Miami location.

The current multiple tenant sign on the approved plans will be converted to a single tenant monument sign facing State Road 7. In the request, the tenant sign was detailed to be more than 200 square feet, which exceeds the village code for a maximum sign area of 150 square feet.

Kristin Herman with Memorial Healthcare, the parent company of the center in Miami and the future location, made a request to allow for directional signage in the parking lot of the building.

“Even though this is single-tenant use, we do have multiple disciplines that are going to be servicing, and with us being in such a new community, servicing such a new area, we typically like to separate our staff versus our guests,” Herman said. “We would like to have, at least at the main cut-ins to direct parking, signs, so that parents know where they are taking their children, where the front is, what modalities are here, and then staff parking in the rear and deliveries in the rear.”

The board felt that was a fair request, so three directional signs were recommended for the purpose of parking.

Shamash made a motion to approve the request for all signage, and he added that the baseball player in the back will be decorative, and the name may or may not comply with the code as part of the decoration on the rear wall. Board Member Damon Robling seconded the approval, which passed the board unanimously, 7-0.

The board also agreed that if the logo does not end up complying with the code, the center should be given a chance to go back to the drawing board to update the rear façade for aesthetic purposes.

ABOVE: An artist’s rendering of the new Joe DiMaggio Children’s Hospital at Memorial Pediatric Specialty Center on State Road 7.