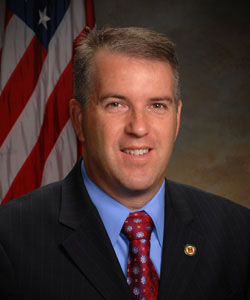 On Tuesday, May 23, State Rep. Matt Willhite (D-District 86) reported to the Wellington Village Council on the recent legislative session, which ended May 8 after lawmakers passed an approximately $83 billion budget.

Willhite, a former member of the Wellington Village Council who participated in his first session as a freshman representative this year, thanked council members for their help during the session in working together to represent the village and its residents.

“It’s still my home, my kids still go to school here, we still go to events, and I’m still happy to be a part of this community,” he said. “I still offer my assistance, as I continued to do throughout the session.”

Willhite noted that the session ran a few days over in order to finalize the budget, which he said had some good things and bad things in it. “There were quite a few things in that budget,” he said. “Some things make us happy and some things don’t make us happy, but as a whole, we’re a great state, and I think a lot of work went into that budget.”

He is hopeful that the budget will help the state thrive and move forward.

Of interest to legislators and to residents for different reasons is the additional $25,000 homestead exemption, which passed the legislature, but still needs to go on the ballot for voter approval.

If approved, he said, the exemption will be available for homeowners whose primary residence is valued at over $125,000.

“Obviously, when you put things on the ballot that are going to save people money, and the idea that they can save money on their homes, there’s probably a good chance that this will pass, and you will have to budget for your future if there is a decrease in your budget due to that additional homestead exemption,” Willhite said.

That change is still more than a year away, since it will not be voted on until November 2018.

Willhite said there was other action in Tallahassee that he took to heart for the sake of residents in Wellington.

He said local governments will have 90 days to show telecommunications companies why they shouldn’t be in certain neighborhoods.

“They’re not going to be able to be above a certain height,” Willhite said. “In other words, they have to meet the characteristics of your town or your village to be able to put these additional ones in, and if they do attach them to a pole in your area, there’ll be a fee they’ll pay. The fee was the most questionable part. It started out very low, it came out to about $150 per pole now as the agreed-upon amount, so it’s not the greatest, but it’s still quite a bit of money, and it will offer the 5G network.”

“As I understand it, most likely they’re going to meet it unless you come up with a reason why it doesn’t,” he said.

Another hot topic was exempting local governments from the Sunshine Law.

“Although it passed, it failed,” he said, explaining that it received a majority vote, but not by the required two-thirds threshold.

“You are going to still fall under the Sunshine Law for all of your meetings and gatherings and all of your activities and things you will vote on,” he said.

Willhite said he was happy that he was able to pass three bills in his freshman year, as well as to bring back some money for the Palm Beach Zoo, grants for students at South University and money for the Village of Royal Palm Beach.

Willhite pointed out that everything that passed is still subject to a potential veto by Gov. Rick Scott.

He added that a lot of items that received much discussion ultimately failed, including personal injury protection, workers’ compensation and medical marijuana rules.

“All of those things had a lot of work and time put in, and they all failed,” he said. “There is discussion that we will be called back for a two-day to three-day session to try and write the implementation for medical marijuana, because at this point, if we do nothing, the Department of Health will write those standards and implement it… It was just that the House and Senate could not agree on the language.”

Willhite said some sober-home legislation did pass that will allow Florida to accept additional funding from the federal government to deal with the opiate/heroin epidemic.

“We got additional support for State Attorney [Dave] Aronberg’s committees, the sober homes task force,” he said. “Going forward, those are going to be extended for another year now. The state recognizes that it is a statewide issue.”