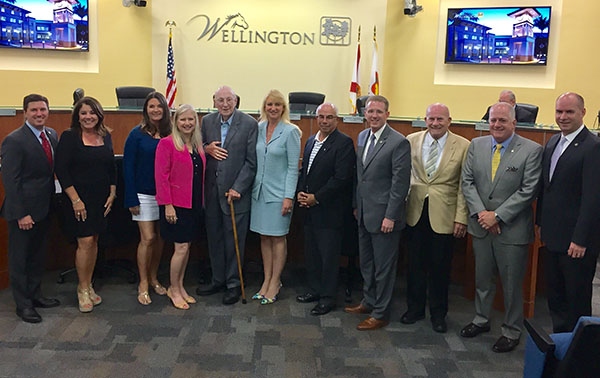 Wenham reported on a series of highly successful events that raised money for community projects that the village is otherwise restricted from contributing to directly.

Wenham said the past year was an exciting time for the foundation.

“June 2016 was a very busy month,” he said. “We had our very first fundraiser at the home of Dr. Ed and Maria Becker. We adopted Forest Hill Blvd. from Stribling Way to South Shore Blvd. as part of the village’s adopt-a-street program. We supported sending five children to the village’s summer camp program.”

The foundation is currently working with Wellington’s Community Services Department to support more children this year, he said.

“In August 2016, we purchased school backpacks and 200 school uniforms for Wellington schoolchildren,” he said. “In November 2016, we held our second fundraiser of the year, our Red, White & Blue Jeans Veterans Day event at the Wanderers Club that 180 people attended.”

“The foundation looks forward to continuing its ‘Our Schools’ grant program,” Wenham said.

In March, the foundation’s board decided to work with former Wellington Mayor Kathy Foster and her nonprofit organization Wellington Cares so its seniors receive birthday greetings, flowers and gift cards from local merchants. “We think that’s a great start, and we’re going to continue that,” said Wenham, who served with Foster on the inaugural Wellington Village Council.

The foundation also approved $6,000 to purchase more school uniforms for the 2017-18 school year.

Next week, the foundation has scheduled a strategic planning session to ensure that it is moving in the right direction and in keeping with its mission statement to benefit residents by supporting and improving their quality of life, Wenham said.

“We will be meeting with and are in contact with a grant writer to assist us in acquiring additional foundation funding,” he said. “This and all other funding will allow us to engage with other entities that need help and support in the Village of Wellington. Wellington Community Foundation members are pleased with what we have accomplished this year, but we ask, ‘What are the potential needs of our students and our seniors in Wellington?’”

Mayor Anne Gerwig commended foundation board members for the work they are doing, helping some of the village’s most vulnerable residents.

She noted that the foundation has come a long way since it was spun off from village control a year ago.

“This was difficult,” Gerwig said. “Some people may understand this was begun originally by the village council. It was determined along the way that it was difficult for elected officials to do fundraising, because of the optics involved in that and because of ordinances and rules that we have to live under. We are really proud of what this group has done. At first, we weren’t sure that it was going to make it, because it did have to be independent and completely removed from us, but you’ve just done an outstanding job.”

Councilman Michael Drahos said the key to the foundation’s success was putting it in the hands of talented residents who have a knack for organization and fundraising.

“I’ve been a big advocate of this charity, and I’m really excited about what you guys can accomplish, because you are superstars within this community,” Drahos said.

Councilwoman Tanya Siskind said she appreciated that the foundation is doing more than writing checks.

“The money is important to these people and organizations, but your organization has heart, and you’re out there hands-on in the community and identifying the needs,” Siskind said.

Vice Mayor John McGovern was also impressed with how far the foundation has come.

“I knew, the mayor knew and the village manager knew that with the right leadership and the right team, you all would come together and make this a success, and you have,” McGovern said. “You have people on your board who are lifetime servants of this village, and people who believe in this place and the greatness of this place.”